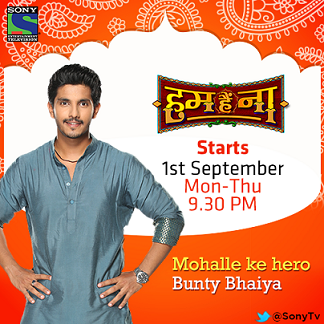 As the popular quiz show Kaun Banega Crorepati 8 is too becoming a platform for promoting films, TV shows are not lagging behind. Last week the audience witnessed that gorgeous Rani Mukherjee made her appearance on the show to promote her film Mardaani. This time it will be popular actor Kanwar Dhillon who was last seen in Life OK's Do Dil Ek Jaan.

He will be making an appearance on the show to promote his upcoming show Hum Hai Naa which kicks off with its first episode on September 1.

Television Actor Kanwar Dhillon is all set to woo the audience with his upcoming show Hum Hain Na on Sony TV. He will be seen opposite Pratyusha Banerjee who rose to fame with popular show Balika Vadhu. The show is based on a boy who is belongs from Banaras and is kind of a perfect guy. The show will project the love story between a boy from Banaras and a girl who is a Bengali who has shifted to Banaras though she is modern but traditional in her thoughts.

Kanwar Dhillion is on cloud nine after he shared the stage with the legendary actor Amitabh Bachchan. Thus he tweeted about his happiness stating, "Best day of my life! Went to KBC for Hum Hain Na promotions. It was an honor to stand on the same stage with @SrBachchan sir."

+ 3
6 years ago Great beginning to the show! Pratyusha Banerjee and Kanwar Dhillon make a good pair...

+ 6
6 years ago Pratyusha and KD u will rock it guys. All the best for the new venture.

6 years ago Just one more day and Pratuysha Banerjee is back.

6 years ago Just one more day and Pratuysha Banerjee is back.Can't wait anymore!!

+ 3
6 years ago Pratysha Banerjee,all the best for your new show