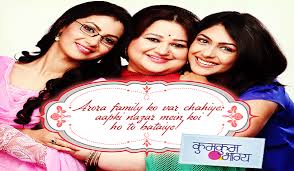 Kumkum Bhagya
Mon to Friday on Zee TV from 9 pm to 9:30 pm.
Producer - Ekta Kapoor, Balaji Telefilms
Cast - Shabbir Ahluwalia, Sriti Jha, Mrunal Thakur, Faisal Rashid
Story so far -
The story is about a woman who runs a marriage hall by the name of Kumkum Bhagya with the income of which she carries on the expenses of her family which comprises of her mother-in-law and two young daughters whom she wants to see getting married and settled in life. The two daughters are poles apart with the elder one Pragya (Sriti Jha) being the kind hearted, hardworking girl while younger one Bulbul (Mrunal Thakur) is a happy go lucky youngster who loves the Rockstar Abhi (Shabbir Ahluwalia). Pragya's neighbor Suresh (Faisal Rashid) who is also her colleague at college is a geeky, righteous professor. When Pragya's wedding gets cancelled and he helps the family in stressful times everyone thinks that he and Pragya will make a nice pair but in fact instead of being Pragya's secret admirer he is actually in love with Bulbul who always makes fun of him.
On the other hand we see that the Rockstar Shabbir is someone who apart from singing in concerts and despite being rich is shown as someone who can do anything for money. 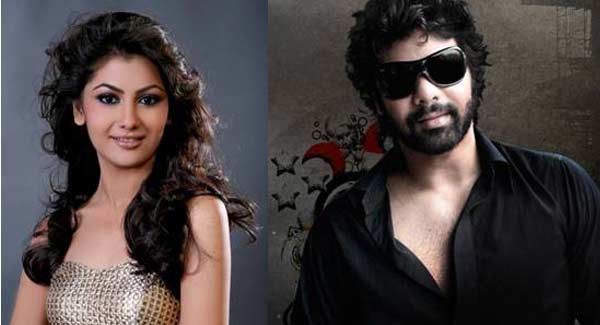 What works -
The Balaji touch is very much evident in the show with the family being the centre of the show and the main protagonist being a simple girl who takes a stand for what is right. The story is moving on a fast pace with the characters being formed with good groundwork. The twist in the story of being in love with the younger sister Bulbul and not Pragya was quite surprising.
The actors too look perfect for the characters they are portraying. Sriti Jha with her simple looks is apt to play Pragya while Mrunal as the chulbuli Bulbul is doing pretty well. Faisal Rashid too does justice to his role but the mother of the girls Supriya Shukla and dadi Madhu Raja are too good. While Supriya as the mother plays the role of a responsible mother with elan, the dadi is shown to be jolly and enjoying life to the fullest.
What does not work -
While every other character looks realistic, Shabbir Ahluwalia playing the Rockstar looks a bit out of place. The actor does play the character well, but overall his character as a Rockstar is not well defined. The reasons as to why he behaves the way he does is not yet established. Also, being a Rockstar it would have been great if the makers had used some original music and songs instead of making him mouth songs from Hindi films which had actors playing Rockstars in it. It would have added authenticity to the character and story.
Our take -
The show so far has taken off with a promising start and hopefully with Ekta Kapoor's involvement will further go on to deliver some exciting moments with unusual twists and turns.
Seema Khot Mattoo
42 Likes

-Piku- 6 years ago Love the show Kumkum Bhagya.. Shabir and Sriti u rock

undhiyu of the above serials by balaji telefilms... hum bewakuf nahi he

Sherni_Jerry 6 years ago very nice show. it is doing great. loving it

Shaina_b 6 years ago Since it is supposed to be an adaptation of Sense and Sensibility, I didn't like the love angle introduced between Elinor and Colonel Brandon!!!!

I feel it was unnecessary!!!!

YMe11 6 years ago Yes, very good start and talented actors, the only put off for me is it being an Ekta show, Her shows start promising then become a khichdi with wrong partner marriges , then divorces, remarriges, break-ups, again remarriages, etc. etc. Total mess up. Hope this doesn't go the same way.

Sona_Chandini 6 years ago Of course the show has a promising start, all Ekta's shows do. But we all know that Ekta's show do not have a promising end.