We have heard many stories of co-actors falling in love, and taking the ultimate step of getting into blissful marriage!! With the arrival of the New Year, Telly Buzz hears one such sweet love story that has changed the life of two actors for good… 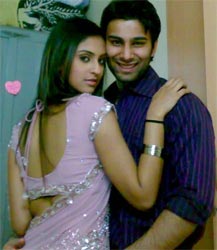 Featured Video
Krystle D'Souza who came to the limelight with Kahe Naa Kahe, and went on to play the role of Veera in Balaji Telefilms' Kis Desh Mein Hai Meraa Dil has been in love for quite sometime now. And the lucky guy happens to be close friend Abhinav Kapoor who was her co-actor in Kahe Naa Kahe.

According to our source, "The two met on the sets of Kahe Na Kahe, and have been thick friends from then. Also, Akshita Kapoor, sister of Abhinav happens to be the closest friend of Krystle in the industry. Slowly, Abhinav and Krystle developed feelings for each other. The duo has been seeing each other for nearly two years now".

We called up Krystle to know more about her love. But all that we heard from the actress is that, "Yes, I am seeing Abhinav".

Abhinav too confirmed the news and said, "Yes, we are seeing each other. We like to spend time together. Krystle is a very honest girl, who will go out of her way to do anything for me. She is very straight forward, and this is what I like in her".

Abhinav was also seen playing the character of Saurabh in Karam Apna Apna. Krystle is presently seen in Sony's Aahat.

We wish the much-in-love couple a great future ahead…

11 years ago they look cute together ...good luck to both of them :...krystel ur doing good work as jeevika ...when the news of karan working with u came out i was so shocked i thought u are not a good actor but u proved me wrong u r a grt actor

awww soo sweet and cute they are!!

12 years ago Aww they r so cute.i really like her charchter i kdhmd n in aahat n also new lad i.e. abhinav in MJHt..they look vute together.......