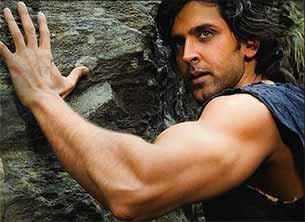 The script of "Krrish 3" has been such that it challenged each and every character and department, says Hrithik Roshan, who plays the title role in the superhero film, and hopes it meets the audience's expectations when it comes out Nov 4.

"The script has challenged each and every character and department. It took my father three years to make it. He said that the film must be able to stand by itself. It was a big challenge for all of us. Hopefully, we have met the expectations," said Hrithik sharing details about the making of the film.

He was speaking at the trailer launch of "Krrish 3" held here Monday.

Talking about the third instalment in the "Krrish" franchise after "Koi... Mil Gaya" and "Krrish", the film's director-producer Rakesh Roshan said he wanted to create a super villian through the movie.

"In 'Krrish', I had established how a superhero was formed. I had to create a super villian through this film. To think about him was tough. He needed to have powers to fight the superhero," he said.

The villian has been played by Vivek Oberoi.

Hrithik said: "Our list was very small as it had only one name - Vivek. I wanted to play the negative character, but I was not allowed to. I could not have done what Vivek has done. He has done an amazing job," said Hrithik.

"He was so sincere in the first film. Now he has become a star, but his honesty, punctuality and sincerity have not changed," said the proud father.