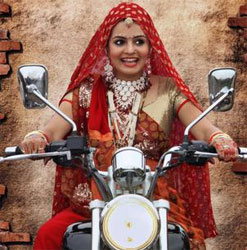 Krishna Gokhani who is presently seen as the very innocent Billo of Bag Films' Looteri Dulhan on Imagine is apparently giving a tough time to the production house.

A source from the sets says, "Krishna has been throwing tantrums on the sets because she wanted an off from the shoot but the production house denied her as she was needed for the cut to cut shoot. And to worsen the condition for the production house, she threw away her nose-ring, which was important for a scene."

We contacted Krishna Gokhani to know her version of the story and she says, "This is not true at all and all these might be a publicity stunt."

Krishna, we hope to believe you here...

SimplyAparajita 9 years ago Kmh and gkd and cgm rocks! And i dont give a dam to other imagine shows! Imagine tv's director, ratan , rakhi sawant, smbhavna, payal,dolly and rahul will watch this dumb ratan la rishta..noone else is intrested! Omg only drama queens can publically take their personal decisions and share their public moments in front of tv! Such hypocrites..hate imagine

Sp666 9 years ago Lol as If karan or Kritika would do this? You give this show a good chance but not KMH? Think programme is fairly boring (sorry to this serial fans) and is about a girl who loots boys. Whereas KMH is a much better serial with a good stryline! This should be axed instead!

deadly-kiss 9 years ago i love KMH 2.. and i hope they dont axe it off or whatever. but i hope this isnt true for the actress krishna... i hope she's not throwing tantrums, it unprofessional and she's ruining her reputation in the acting field.

kmh2biggestfan 9 years ago this is outrageously disgusting,gkd and bavd aired before kmh so why shud kmh end?I hope you are reading this imagine.100's of ppl here in england are disgusted by imagines behavior totally!

.vrshn. 9 years ago look at how popular this show is...only one comment...dat too for kmh!!
we love kmh!! why dont u guys axe this show???

SimplyAparajita 9 years ago Please kmh is much better than this show. Please dont end kmh. Hate you imagine. Sorry for posting here as i cant control my angerfit right now :(

Reemawitch 11 years ago Definitelu you jagdu...you are definitely bothered about Bebo else you would not have read that article and even bothered comment

nikitabendre104 11 years ago well, uhh..oh my is all i can say abt this! so uhh. he''s like my fav actress and i admit that i am a little jealous! ( even though he''s married!) LoL