Many industry people hailed the decision even though some were against the way Sampat went about securing his rights. The industry reacts:

Subhash Ghai: 'Though I've no right to comment on this case without knowing the inside story I must say we sometimes mistake an inspired re-worked version of a song or film as our own original work of art without realizing the complications of copyright laws.

It's no secret that we in this country have been adapting and re-working on music and movies completely ignorant of the laws. This case has warned us about the future. However I'm sure Rajesh Roshan is talented enough not to pick on anyone's work.

A.R. Rahman: 'No comments. But it's high time everyone cleaned up his act and people started getting fair to creative people.' 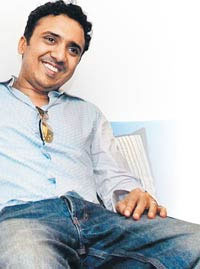 Mahesh Bhatt: 'There's always someone somewhere who's smarter than you. This case is a wakeup call for Bollywood. The world has changed. We need to mend our ways. It will now be tougher for us to 'steal' and not get caught.

Manish Acharya: 'When I made 'Loins Of Punjab Presents ...' I got the copyrights for every single evergreen song that I used as part of the music contest. Even the music companies were surprised when I sought permission even to use an eight second clip. I don't watch TV so I don't know the merits of Ram's case. Nor have I heard the 'Krazzy 4' songs. But valuing the IPR (Intellectual Property Rights) is inevitable given the film industry's growth strategy and influx of corporate money into Bollywood.

Alisha Chinai: 'I absolutely agree with Ram Sampat's action. Plagiarism is a way of life in Bollywood. They don't play by rules. They're unethical and they rip off songs, copyrights and royalties of musicians and singers shamelessly. If this continues the music industry will crash.

Kunal Ganjawala: 'Some of us singers have been fighting an ongoing battle against discrimination in the film industry. Do you know we singers in the film industry are still legally known as 'instruments'? Can you imagine Lata-ji (Mangeshkar) and Asha-ji (Bhosle) are 'instruments'? Seen in that light, Ram Sampat's court victory is a big step ahead. I've known Ram for years and have worked with him. He's hugely talented and he doesn't really care about doing music in films. He's happy with his jingles and his ventures abroad including one with the European band INXS, which he has just completed. Ram has opened up the discussion about the importance of musicians in Bollywood. However the Roshans (Rakesh and Rajesh) whom I've worked with in 'Krissh' are honourable people.

I can bet my last song they'd never ever do anything underhand. Apparently the cellphone company Sony Ericsson has goofed up. They sent the Roshans a clearance letter to use Ram Sampat's tune and didn't inform Ram. Five years ago a composer named Rupert Fernandes was paid a pittance for a signature tune for Hutch, which became their product's international theme. If musicians today are thinking and getting big money, I'd say about time. But I still insist the Roshans aren't capable of cheating anyone.

Pritam Chakbraborty: 'I've often been accused of plagiarism, so I'm in a peculiar position as both a musician and an apparent offender. Both Ram Sampat and Rajesh Roshan are wonderful creative people. Ram is a great musician. At the same time I've grown up listening to Rajesh Roshan's tunes. In a way this judgement in Ram's favour is a huge leap for the music industry. On the other hand, the timing of the accusation when producer Rakesh Roshan's film was on the verge of release and he had no option but to pay up is unfortunate.

In the West, musicians are treated decently. Ours is a very disorganised entertainment industry and Ram Sampat has set a definite precedent. And my respect for the judiciary has gone up manifold. An underdog winning a case so speedily....wow! However this precedent can be misused. Even a fiercely original film like 'Chak De India' was accused of plagiarism. Scarily enough the Roshans tried to take proper permission from Sony Ericsson. There was a mess-up. So their intentions were not wrong.