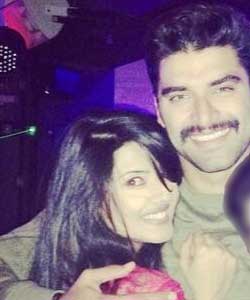 TV actress Kratika Sengar who was last seen as Aarti in Zee TV's Punar Vivah, is soon going to tie the knot with well known actor Nikitin Dheer who featured in the film Chennai Express. Nikitin who is all set to be seen in a daring stunt based show Khatron Ke Khiladi Darr ka Blockbuster, has already made his presence felt on a TV show Comedy Nights with Kapil on Colors.

Well, it seems that the couple is very much in love with each other which can be seen in the pics posted on the social networking site. In fact Kratika Sengar had also been spotted at Cape Town along with the troop of the Khatron Ke Khiladi contestants.

Confirming about the same our source says, "Nikitin Dheer and Kratika Sengar are set to take the nuptial vows."

When contacted Kratika, she excitedly says, "Yes, I am getting married to Nikitin may be on 3rd September as the dates are not yet fixed and we are very excited about it. It's an arranged cum love marriage. Nikitin's father Pankaj Dheer who is also an actor, was directing a film where he saw me and his father approached my parents and then even we starting liking each other. Right now I don't want to reveal everything because I want things to get finalized and then I will reveal everything about our relationship but we are getting married for sure and I want everyone to block your dates as we will send an invite to all the people from the media."

That's really very sweet of you Kratika. We wish the couple heartiest congratulations!

Nimrit Kaur Ahluwalia on Kratika Sengar filling in, returning to the ...

With Nimrit re-entering, another new entry to take place in 'Choti ...

7 years ago Hey Nikitin Dheer and Kratika Sengar, m very happy for u guys...god bless u both...u guys make an beautiful pair...love u both a lot..

+ 2
7 years ago congratulations Kratika...u r very sweet...have a great future with ur love of life!!

7 years ago Kratika Sengar ,so happy that u ve found ur better half...

7 years ago Kratika Sengar love you so much ..and i wish you all the best for your married life with Nikitin !

7 years ago hey kratz i am so happy that you found your love ! god bless u both

7 years ago Congratulations to Kratika Sengar and Nikitin Dheer . May U have a happy married life !!