Kitani Mohabbat Hai, the new daily show from Balaji Telefilms on NDTV Imagine has been termed as a  'hatke' show with something new to offer to the viewers. Its an attempt to tell a story of two people who belong to diverse backgrounds and their tale of love and struggle.

Story:  Love changes people in the most unbelievable way. How far can love take you? Is it strong enough to take up the challenges? Is it deep enough to survive all conflicts? Kitani Mohabbat Hai answers these questions in more than one way for Arohi and Arjun, the main protagonists of the show.The story revolves around them and their eternal love saga. The show begins with the protagonist narrating his story to a lawyer in the jail. How did he reach there? What were the ups and downs faced by the love-birds? And above all, why he does not want anyone to fight for him? All this will unfold in future.

Concept: Rani Mukherjee enters the jail to meet Shah Rukh Khan in Veer Zara or rather, Ganga (Rakshanda Khan) enters jail to meet Arjun Punj (Karan Kundra) in KMH. The story starts from Veer Zaara, takes us to Dilwale Dulhaniya Lejayenge and now by the end of the first week, we have reached . If you can call it a concept then it is, as they have mixed three Block Buster movies, hoping to make a Block Buster show Kitani Mohabbat Hai. The real Balaji story has also started in between with big business tycoons holding their ground, lavish parties and not to forget the usual vamps, as Mrs Mittal has all the potential to be one. This show has all the ingredients and staple diet for couch potatoes, covering all kinds of viewers and range. Arohi is no different than a Kasturi, Kkusum or a Kripa, so is Arjun who carries the image and persona of  Robbie and Angad. The show on the whole is no different and takes you straight to Balaji valley of Soap operas. So expect the usual twists and turns; no matter what tall promises producers had made, this is not Hatke but a usual Ekta show.

Actors: The main reason of Balaji shows not doing well of late is the lack of actors of the stature of Hiten Tejwani, Gauri Pradhan, Eijaz Khan, Iqbal Khan, Neha Bamb and many others. KMH might break this drought for the Production house as Arohi(Kritika Kamra) not only acts well but looks beautiful and fresh too.  So is the dashing and hot Arjun Punj(Karan Kundra) minus his kajal-filled eyes. It is true that one can speak thro' eyes, but overdose is always not advisable. Rest of the cast is the same as any other Balaji show, where they have played either a mom, or sister or father to death. However, as a breath of fresh air comes Satyajeet Sharma aka Basant of Balika Vadhu as D.K. Punj, father of Arjun, a very shrewd Business tycoon. Let's see how his role turns out and we wish that the directors do not waste him or replace him in this love saga. 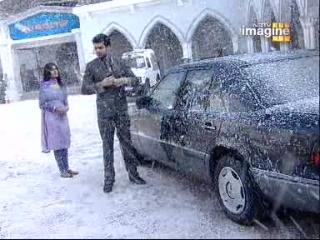 Set and Ambiance: Snow, snow and more of Snow! Loads of snowing took place in the first week itself, but people are still walking in cotton clothes or in just a shawl. Following every snowy night is a bright and sunny dawn with no trace of snow anywhere... Again a typical Balaji tradition and custom, this show has great but repetitive sets, but the manner in which Arohi's house is less lighted is a mystery! Arjun's house is huge with heavy embellishments on walls, big chandeliers and an attractive garden. There is the usual bridge of Balaji here too as well as situations near the lake/pond/canal/river was also seen. We can say that the train and jail scenes came across as refreshing, as we have not seen such scenes in other Balaji shows till now!!

So in a nutshell, the show has very nice actors as leads, while the rest of the things are moving on similar lines, starting from story to treatment and other characters. But we hope to see a twist in the tale when the real love story unfolds, and of course we are curious to know what lies ahead for the lovers!!

*1 Soap Stinky one ,1-12/soaps -somewhere in between, 2 Soaps Slippery with no fragrance ,2,1/2 :with little fragrance,3 Soaps sandal wood with rose petals , 4 Soaps must use/watch

5 years ago now that the show has finished long long ago,this comparison to veer zara is not applicable. The only similarity between kmh and veer zara is that noth the protagonists went to jail and lived there without interacting with anybody until a female law yar came to help , and then the male lead narrates the love story. Other than that the stories of both were very much different, kmh was a beautiful show

8 years ago Wow funny...they said all these things about kmh saying usual balaji types well too bad coz kmh was d 1st Eva program 2 see it's sequel wateva any1 says d truth is kitani mohabbat hai was always d best n it wil stay as d best... I stil watch it on YouTube that's how awsum d show is<3 :'( without it on tv m incomplete KITANI MOHABBAT HAI IS THE BEST PROGRAM EVER THE BEST THING EVER <3 LOVE KARAN KUNDRA AND KRITIKA KAMRA THEY RULE<3

+ 2
9 years ago king kundra and queen kamra best stars in the world and KMH2 awsome show iska moukabla koi nahin karsakta ,,nai chahyer RKR bakwass and nono no no no n no to KMH2 END no imagine u cant do this with all fans do justice

9 years ago KMH2 has hasn't disappointed me one bit! I look forward to KMH every single day and then watch its old episodes over weekends! LOVE every minute of the show! Needless to say that Karan and Kritika are superb!