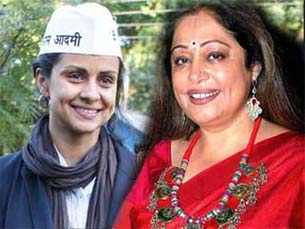 Kirron, 58, was accompanied by her husband, actor Anupam Kher, and top Bharatiya Janata Party (BJP) leaders from the Chandigarh unit. This was in sharp contrast to the black flags shown to her to protest her candidature when she arrived in Chandigarh from Mumbai Tuesday.

Gul, 35, who was Miss India in 1999, was accompanied by her parents, family members and Aam Aadmi Party supporters as she filed her nomination papers.

A former railways minister who was forced to quit his job May last year after his nephew was arrested by the Central Bureau of Investigation (CBI )in a bribery scam for top railway jobs, Bansal has been elected MP from Chandigarh four times - in 1991, 1999, 2004 and 2009.

Chandigarh has nearly six lakh voters, out of which nearly 60 percent are in the 18-40 years age group. Nearly 46 percent of them are women voters.

It is for the first time that three women candidates, all from frontline political parties, are in the fray for the Lok Sabha polls. The third is Bahujan Samaj Party (BSP) candidate Jannat Jahan.