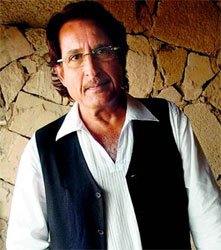 The new love story on television will now be a 'Chajje Chajje Ka Pyaar' which launches on Sony Entertainment Television on 28th February at the 8.30 PM slot. As we reported few hours back, this show will be taking the place of Baat Hamari Pakki Hai..

The show produced by Endemol has a refreshing cast of experience as well as new faces. The latest we hear is that veteran actor Kiran Kumar has been roped in to play father to the female lead.

We called up Kiran Kumar who confirmed his presence in the show, but refused to divulge details.

10 years ago Aaaahhh!....got reminded of Mujhse Dosti Karoge when i saw this article!!!!!......Am already gonna watch this show since it seems interesting, but now am all the more excited to watch it since it have one of the actors of mujhse dosti karoge!!!!

10 years ago Good luck, little show. Airing on SET, you'll need it. There's a short life and a slow, painful death in store for all shows other than CID that dare to be on it.

10 years ago Please think of changing the time slot for this serial.

+ 5
10 years ago Please find another time slot for this show and leave BHPH where it is.

10 years ago What's the point? Sony's just going to axe this after barely a year, too.

+ 5
10 years ago plz dont look the trp ratings we support dis serial as long as we r in dis forum . sony tv i want to say dat all u r other serials is juzz not gud and dis is the best serial u got

10 years ago Bringing in new shows r fine but not at the cost of another good show which has been the very essence of so many fans.....dont disappoint us. Iam unable to understadn Sony's management ideas.....bringing in a new show during world cup n IPL is not a gr8 idea...established show like BHPH is getting axed how is a new show going to get the audience's attraction n bring in top TRPs??

10 years ago Looking forward to the new show, but definitely not at the cost of BHPH. BHPH need not be axed, it can be aired at a different time- slot.