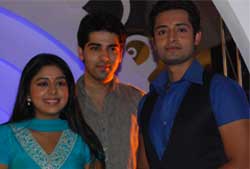 Kinshuk Mahajan was one of the pillars of strength of Rajan Shahi's Bidaai on Star Plus, till he quit the show, as he did not want to be a part of the show, post-leap. He gained immense popularity as Ranvir of Bidaai and won millions of hearts.

Seems like prayers of Kinshuk's fans' have been heard. Since he will soon be seen in Rajan Shahi's Chand Chupa Badal Mein on Star Plus. The actor, who was not to be seen since quite while now, was recently seen making his first ever appearance in public with Abhishek Tiwari and Neha Sargam, the cast of Chand Chupa Badal Mein.

Kinshuk was spotted with Abhishek Tewari and Neha Sargam at Oberoi Mall, to promote eco-friendly Ganpati. When asked about his experience, working with Neha and Abhishek, he said, "It was a great experience to spend time with Abhishek and Neha, both have been very nice to gel with and they gave me a warm acceptance. It's been a nice break for me, after Bidaai as I got to spend some awesome time with family in Delhi. Now, I am eager to get back to action. Both Abhishek and Neha are nice to work with and I hope to have jolly time with them."

Kinshuk is expected to start shoot next week. Though not much has been revealed about his character in the show, we hear that he will be paired opposite Neha Sargam. Kinshuk's magic on screen, will surely work wonders again.

Sanaluvskinshuk 10 years ago Kinshuk you are doing a gr88 job in CCBM
VIREN ROCKS!!
LOVE YOU!

Anyway!! m Just waiting for him like Crazily..Thisis too Much i want another ARticle now which will finally reveal his Characters Name and stf like the exact date ofh im Entering the show...Hope he is shoting now..Ijust hope hope hope he entres by the end ofthis Week or max next week is se agey na ho

+ 2
10 years ago Kinshuk ur gonna Rock Rock Rock
I am sure you re gonna rock
gosh i so cANT Wait now...When are we getting the promos nall??
Star plus we need Kinshuk badly...we are going crazy...Kinshuk is gonna come back with the bang guyz..
Wohoooooooooooooooo i m outa wrds noe...Cant Cant Cant waigtttttttttttttttttttttttttt

10 years ago Yaar Nivideta will really look nice with her just check the pic on the top. I think she is totally complimenting him.

+ 3
10 years ago @aruntouch yaaaa dear we all want a dhasu promooo regarding his entry .hope so itna toh karenge ct's,SP wale becozz they hav 2 increase their show's trp so for tht they hav 2 promote kinny's entry

10 years ago waiting for your promos & brilliant acting.

samra_1 10 years ago Welcome back Kinshuk
but CCBM? why? It's not a good show.
Missed you and love you alot.