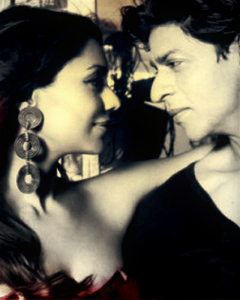 25th of October marks Shah Rukh and Gauri Khan's 20th wedding anniversary. Yes, two decades of family bliss, but unfortunate are circumstances which render them apart on their special day. For instead of spending it with his better half, SRK will be away in the chilly German capital, Berlin, shooting for Akhtar's sequel, Don 2.
Though he's going to be away on their anniversary, SRK, the self proclaimed joru ka ghulam on national television, has his way to make up to his long time lady love! On November 2nd, which happens to be King Khan's birthday, he plans to take a break and spend exclusive, cherished time with his family.
In Rome, a special screening of My Name Is Khan, is going to be held at the international film festival. Instead of going alone to the pristine city, SRK will whisk along wife Gauri and kids Aryan and Suhana to attend the occasion. Close mate Karan Johar will be joining them.
Although that's a plan to have, we sure hope Shahrukh, the romantic icon of Hindi cinema will have some secret scheme up his sleeve for the special day coming up this week, marking two decades of the Khans' togetherness!