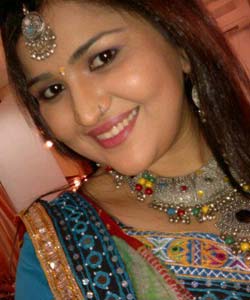 Mrs. Kaushik Ki Paanch Bahuein has always kept the audience's glued to the TV screens and after Anamika's exit from the show , creatives are planning a new twist with a new entry in the show.

Guddi Maruti  will enter the show with her two daughters and she will be Mrs. Kaushik's childhood friend who has come down from abroad with her two daughter. Khushbu Thakkar who is currently seen in Star Plus Ek Dusre Se Karte Pyaar will play the role of one of the daughters. Khushboo will play the character of Honey who is a glutton. We hear that Guddi Maruti and family will fake their abroad connection.

Tellybuzz contacted Khushbu who confirmed the news ," Yes, I will be playing the character of Honey who just loves to eat and she will be irritated with the family as they don't cave into her food craving. It is a very interesting character."

rajh 8 years ago what this new daughter will do in the serial?

is comic role or negative role??

The track does indeed similar to Ram Milaye Jodi,with Vimi's friend faking that she is from abroad and wanted her daughter Pam to marry Karan...

I was just thinking bout that when i read your comment dee. ;)

A HUGE FAN 8 years ago As long as they don't mess with Karly I am okay with this!

-Nirvana- 8 years ago The track does indeed similar to Ram Milaye Jodi,with Vimi's friend faking that she is from abroad and wanted her daughter Pam to marry Karan...

desicrowd 8 years ago Well she looks like Sonakshi Sinha on this pic...

orianthi 8 years ago Well as long as these daughter do not want to steal Karthik from Lovely, i am fine

Charvi Saraf is finally happy that her character got a ...
28 minutes ago