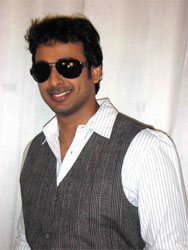 Ekta Kapoor's much awaited Keshav Pandit has announced its launch date. The promos are out on Zee  TV and the show will launch on the 15th of May .The show will be aired every Saturday at 8: 30 pm.

As reported earlier, Rajat Tokas who was last seen portraying the character of Veer in Imagine serial Dharam Veer will play the younger version of the lead role of Keshav Pandit. Later, the character will be continued onscreen by Sarwar Ahuja who is presently seen in Imagine's Jyoti. Via Choudhary (of Raja Ki Aayegi Baraat) will portray the role of one of the girls in Keshav Pandit's life.

The serial will also have the same concept that was written in the novel. Keshav Pandit is a person who gets punished for a certain crime in childhood, and this is when he is given a very important Law Book by someone, who asks him to read all the clauses mentioned in the book so that he uses them to his own advantage. From that day onwards, Keshav has a strong hold on the rules of the law, with his main weapon being his mind power and knowledge. He does not even have a law degree but nobody can dare to stand against him in the court room. Keshav's main aim is to help the downtrodden and the needy, at the same time wage an open war with the culprits.

We called Sarwar Ahuja. Sarwar expressed his surprise at the show having been launched. He said, "I have no idea about the promos."

BB 14: Shardul Pandit gets eliminated from the house

10 years ago Rajat rocks...but I don't like Sarwar as KP

10 years ago This plot just seems like carbon copy of the show, Siddhant which use to air on star one. I guess we will have to wait and watch...