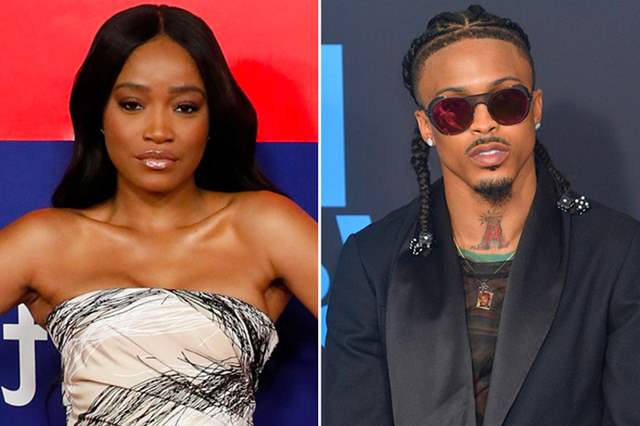 There has been an outburst online after August Alsina took to Twitter to share his thoughts, specifically about Keke Palmer.

Even their romance rumors were addressed where Palmer responded and denied that she ever dated him.

"August was never my man," Keke said in response to a fan who asked her to confirm if she was in a resurfaced pic with August. "That's why you're still reaching to this day to figure out nothing."

The fan's tweet has since been deleted. Catching wind of Keke's reply, the 27-year-old singer spoke out. "U absolutely right. I was NEVER ur man. You could possibly never shortie. It seems u mad u got curved, but ur 'friends' r the reason 4 that," he wrote in a quote tweet. "Dey showed me an endless thread of txt/pics of me dat u sent, wrry'd abt who i date & BEGGED me 2 not further disturb ur mental instability."

"Imagine not knowing how to mind the business that pay you. I catch all the subliminals. (Not just about today)," he continued, which appeared to still be in response to Keke. "You can call me whatever you like, Mess is constantly inserting yourself in topics you have nun to do w/."

August's tweets didn't end there. He shared, "If you have something to say, say it w/ ya CHEST kids. It's always very perplexing cause I real deal be showing people genuine love. Whole time that envy eating ya lil heart. Anyway, NEXT!!" In one of his final messages, August said he was "perplexed" to see Keke talk about him. "I don't and never have had a problem w/ the girl. It's always been Virgo love! So to see that is a mind f--k to me," he wrote.

Despite August's heated Twitter thread, Keke took to Instagram to seemingly share her response to the situation. It was classy and iconic all at the same time.

"I wanna be mean, but I can't. I want to post screenshots, but I won't. I feel attacked, but It's not about me. It's about so much more than that and as much as I want to defend myself against the disrespect I have received (cause I mean I'm not nice all the time) this is about something so much bigger," she expressed on Instagram.

"I wouldn't feel good kicking someone when they are down because it's so easy to attack when you're in a corner, I get it. People be hurting y'all and most of the time it has nothing to do with you," her message continued. "I can't f--k up my karma worried about my ego, though I'm human and I have one. Just know I am that bitch despite what my humility may make one believe."

In closing, she said, "I don't have to beg or be thirsty for a damn thing because my talent speaks louder than my looks. Let the cheek be turned pooh's, my character is too strong."

She later told her fans on Twitter that she loved them and thanked them for their support since day one. The actress also added, "The theme is boundaries. Everybody doesn't need to know your business, that's not fake it's honoring one's privacy."

August's Twitter thread came only hours after Jada Pinkett Smith addressed allegations that she had an affair with the 27-year-old. On Friday's episode of Red Table Talk on Facebook Watch, the actress sat down with her husband, Will Smith, and opened up to him about everything.

While Jada originally denied she was romantically involved with August, she confirmed it was true.

Varun Dhawan Blasts a Fan for Slamming him for his Pic with a Police ...