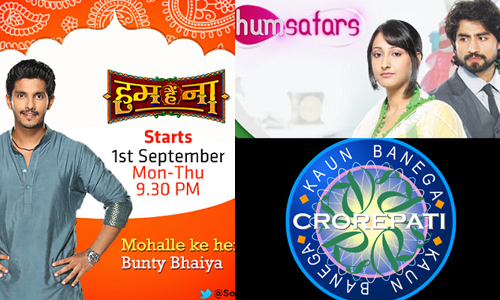 Sony TV has recently launched two new shows Hum Hai Naa and Humsafars. While the show the quiz show Kaun Banega Crorepati 8 is doing extremely well and riding high with its popularity, these two shows along with KB are all set to promote their shows in various cities.

Though Hum Hai Naa is a month old now, Kanwar Dhillon and Prtayusha Banerjee's acting has impressed the audience and are loving their love story which will soon commence in the show. As KBC's grand launch was conducted in Surat, this time the makers are planning to promote it in a grand way in other cities too.

As the much hyped show starring Harshad Chopra and Shivya Pathania in Humsafars, the show's first innings seems to have garnered the attention of the viewers. The cast had been to Lucknow for their promotions as the story is based on Lucknow, now they are all set roam over the country.

The cast and crew of all three shows are will leave on Saturday to Raipur and a special episode will be aired on KBC where the star cast of these shows will be present.

TellyBuzz Wishes entire cast of all the shows all the best!

aisha-m 6 years ago Waiting for this episode...

Waiting to see you in KBC

Sneha.Love 6 years ago Pratyusha Banerjee and Kanwar Dhillon captured our hearts as Sagarika and Bunty in Hum Hain Na.

Urooj.HCiansx 6 years ago Wow so excited for Harshad Chopda in KBC *Meet Partners* Amitabh Bachchan i know humsafars in KBC enjoying a lots! Thank you for sending the article

All the best very much!