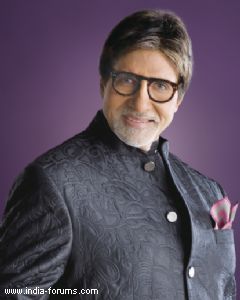 The 2013 edition of popular reality TV game show 'Kaun Banega Crorepati' (KBC) is said to conclude Dec 1. Its host, megastar Amitabh Bachchan, who shot for the last episode here Wednesday, says it was an experience full of fun and thrills.

A source confirmed saying that the last episode will be aired on Sony Entertainment Television December 1. For Amitabh, it was an emotional yet exhilarating moment to shoot for the concluding episode.

"Another day at KBC, the last for this season... but hope it fills again by the (next) year (and) fun becomes at KBC... without the inputs from the extended family, nothing would have moved. Thank you," the 71-year-old posted on Twitter in the early hours of Thursday morning.

Amitabh, who flew out of country on Thursday morning, believes 'work doesn't tire you' and says one glows in the love showered by the audience.

"And so here ends the lesson last episode of KBC done, and what an episode - fun, thrills, and the joy of those that win," he added.

The show is the Indian adaptation of international format 'Who Wants To Be A Millionaire'. KBC first went on air in 2000, and it changed the face of Indian television when Amitabh stepped in as the host.

Except the third season, which was hosted by Shah Rukh Khan, Big B has been in the anchor's seat for all KBC seasons.

humak 6 years ago KBC is the best show hope that the KBC season come fast. and AB is also good Come back soon KBC season.

ryali.akhil 6 years ago yes i cant except this iwas shocked on watching this