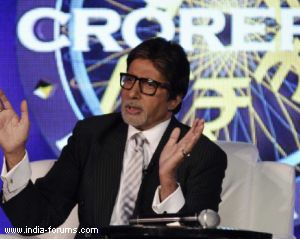 Game show "Kaun Banega Crorepati", to be hosted by megastar Amitabh Bachchan yet again, will be back in its prime time slot, channel officials said Tuesday.

"We have not decided the days but the talks are on. We will soon make an official announcement," he added.

The channel Thursday announced yet another marketing and communication campaign "Sirf Gyaan Hi Aapko Aapka Haq Dila Sakta Hai" as the communication theme for the upcoming season of the game show.

"The challenge was how do we take the philosophy to the next level. We came up with 'Gyaan hi aapko aapka haq dilata Hai' because it's a great factor to empower people. When you see the show you will see shades of that," said Khan.

"One of the most important part of the show is how we democratise the entire KBC. We have taken immense pain with lot of pleasure to ensure that we expand the base of KBC. Every time you are going to see KBC episode, you will see a small India."

Big B, who has been hosting various seasons of KBC for quite some time, will be seen again for the KBC 2012 as well. Khan says they can't think of anyone else in his place.

"There is absolutely nobody like Mr Bachchan. His appeal transcends across all the age groups. He can relate and connect with people of all backgrounds. His command over the language - Hindi, English and many other local language, his humility and sincerity these are the factors that drives his popularity."

"And that brings immense popularity to our show. People are eager to watch him again on KBC. I can't think of anybody else."

KBC 2012 is slated to telecast by August end or by September.

Ritushree_Nadal 8 years ago wowww,KBC is back,beware daily soaps,KBC is the only show which can make a difference in each n every aspect of indian television

gucciamor85 8 years ago i dnt think it will be at 8:30pm since they are launching a new show at that time,i guess it will bw at 9 pm,bt sony pls dnt end parvarissh...chnge it to other time 7:30 pm bt dnt end it

dharamluvgiaa 8 years ago love the kbc. Hope it come at the end of aug

Dilli4BALH 8 years ago I simply love KBC. Entertaining as well as knowledgeable.

Girlabouttown 8 years ago I simply love KBC. Entertaining as well as knowledgeable.

*Dev.* 8 years ago I js Love dis show! Hope its get a gud slot but due to this other serials can't be closd!

vops_unlimited 8 years ago Talk about getting into talks first. Reminds me of planning my own transitions using an unlimited and dirt-cheap way, vopium.com/call-india

adoremevirgo 8 years ago i loved all seasons of KBC except the SRK ones...