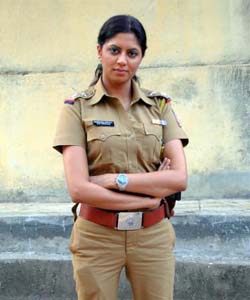 Sony TV's Jhalak Dikhhla Jaa Season 4 see its premiere episode on 12th December followed by the first episode on 13th December. TellyBuzz was the first to report about the big celebrity list to grace the inaugural episode of Jhalak. We had given the list of Celebrities who will be introducing the 12 contestants of this Season.

We now hear that Kavita Kaushik aka Chandramukhi Chautala of SAB TV's FIR wil join hands with the Living Legend Dharmendra to introduce the boxer, Akhil Kumar. The shoot for the same took place on 1st December and they both had a gala time together.

"Though Dharmendra was not comfortable dancing on the floor, he honestly tried to put in his steps, portraying his style of dancing. Kavita had come to promote her show, F.I.R; she was in her get-up and they both danced on Dharmendra's one of the popular numbers 'Rafta rafta Dekho Ankh Meri Ladi Hai',"adds our source.

We contacted Kavita Kaushik aka Chandramukhil Chautala to know her experience with the Legend. "It was very much exciting to share the stage with Dharmendra. But more than me, my mom was excited about this, as she used to be a big fan of him in her younger days".

It can be said that the countdown begins for Jhalak Dikhla Jaa!

12 years ago Congrats SRK! You are my hero and the King of my heart and of course, MILLIONS OF OTHERS!!