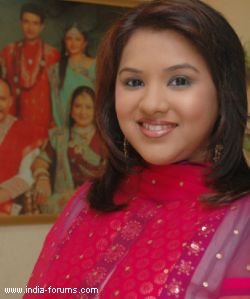 Rajshri Productions' new offering on Sahara One, titled Jhilmil Sitaron Ka Aangan Hoga will showcase a fresh twist, that of daughters not going thro' the customary 'Bidaai' and rather staying back at their mother's place, thus paving way for the husband to become the 'Son' of the house. And this comes after the production house's long association with the channel through their landmark show Woh Rehne Waali Mehlon Kii.

Jhilmil Sitaron Ka..  will see the love story of Akash and Angana, two contrasting personalities when it comes to their background and style of living. The manner in which they change for love forms the crux of the story. Pankaj Tiwari of Shree fame returns to television with this show as the male lead, while new find Shriya Jha plays the female lead. Sudha Chandran, Rakesh Paul, Praveen Hinghoria, Sukhwinder Chel, Sonika Handa, Monaz Mevawala will play pivotal roles. Jasjeet Babbar, Bhabhi to known Bollywood actor Raj Babbar will play a small yet very important role in the show.

The show has initially been shot in Indore and Mumbai.We hear that the evergreen title track of the famous Rajshri Productions' movie Jeevan Mrityu which goes by the title of the show, Jhilmil Sitaron Ka Aangan Hoga has been revisited for this particular show. The track for the show has been sung by Kunal Ganjawala and Madhushree, and new lyrics has been added to the song.

On the new show for Sahara One, Producer Kavita Barjatya has this to say. "Getting back to Sahara One is like getting back to family. After years of acquaintance with Woh Rehne Waali Mehlon Ki, we wanted to give our best to Sahara. Jhilmil Sitaron Ka will be a unique show providing a new angle to marriage where the mother wants her daughters to stay back with her even after marriage by getting her sons in law to stay with them. We have picturized a song that aptly conveys this thought which goes as 'Ulti Ganga Behti Hai'. We have had a great experience working with Sahara, where you are given full freedom to work. I want to personally thank Boney Kapoorji and Suresh Mishraji for being helpful in bringing this show on."

The show is expected to launch in February on Sahara One.

Reena Kapoor on another return with 'Ranju Ki Betiyaan'

Boney Kapoor disappointed about 'Maidaan' and 'RRR' clash at the box ...

+ 2
9 years ago A Barjatya show or movie is always worth watching. Waiting for it to be on air.