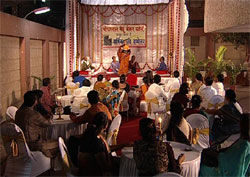 Sulbha Arya who entered NDTV Imagine's Ghar Ki Baat Hai, produced by Red Chillies Idiot Box last week will be seen attending a Kavi Sammelan this Saturday which will give rise to some hilarious situations.

She plays a world class writer who has written a book on romance. Kaku (Swapnil Joshi) does not want Mausi (Sulbha Arya) to win as he wants Rajdeep Yagnik (Sumit Raghavan) to win instead.

Director of the show Anant Mahadevan explained the Kavi Sammelan sequence and said, "Sulbha Arya will be seen in two more episodes. This weekend, a Kavi Sammelan is organized in the colony where everyone is participating. All come to know that Yagnik's Mausi is an award winner in Kavi Sammelan and if she performs, chances of Rajdeep winning it will go for a toss. So they create many situations that stop Mausi from participating. This leads to a great comic climax which needs to be watched".