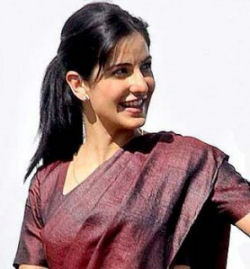 Katrina Kaif, the only femme fatale on the sets of Rajneeti, per this privileged singularity, is being unduly pampered by the remainder, entirely male crew.


At the moment, Kat has a new address which happens to be a dubbing studio located in a Mumbai suburb, booked exclusively for her for 20 days. Prakash Jha has shown unusual favor towards her as a reward of her dedication for his project. Katrina is restricted by no schedules over the solitary time she spends in the studio to rehearse proficiency and conviction in her hindi dialogues. The male star cast, comfortable with their lines in shudh hindi are easier off.


They spend the extra time instead, to cater to her whims following director Jha's ways. Some exclusive attention the lady seems to have gathered for herself!


We say then, all is fair in love and Rajneeti!