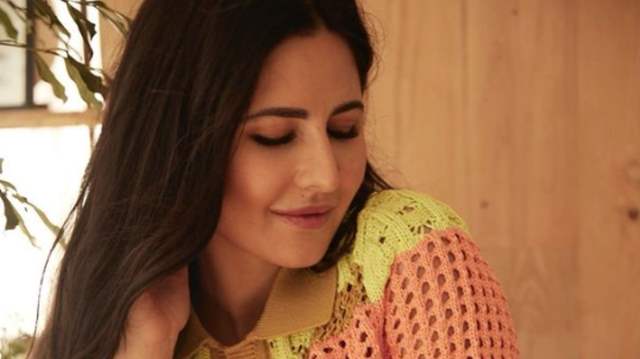 Katrina Kaif is currently one of the most talked about actresses in tinsel town. She is just doing great be it in her personal life or her professional. The actress have been quite active on social media as well and keeps posting pictures and videos to keep her fans updated.

Recently, Kat shared an adorable candid picture of her and fans were gushing over it. She decked a knitted cardigan top with pastel hues of yellow, peach and red. She paired the collared top with grey denims. As always, the Jab Tak Hai Jaan actress kept her makeup minimal with a nude lip tint and charmed everyone with her natural glow. Sharing the picture she wrote, "Morning ☕️ 🌺".

Katrina recently made headlines as he was spotted along with hubby Vicky Kaushal visiting Arpita Khan's house for Ganpati darshan. She entered hand in hand with Vicky Kaushal as they made it to Aayush Sharma-Arpita's house. The couple was twinning in yellow outfits. While Katrina was decked in a lime yellow sharara, She wore her hair loose and had flawless skin. Vicky Kaushal, on the other hand, donned a white pajama over a dark yellow Kurta. The Masaan actor finished off his ensemble with brown shoes.

For the unversed, Katrina has always shared a great bond with Salman's sister Arpita and have always been a part of the functions or parties hosted by the Khan family.

On the professional front, Katrina is currently gearing up for the release of her film 'Phone Bhoot' which will be released on 7th October. The film produced by Excel Entertainment also stars Ishaan Khatter and Siddhant Chaturvedi.

Apart from this she will be a part of Tiger 3 reuniting with Salman Khan in the spy thriller. Emraan Hasmi will play the antagonist in the film. Katrina also has 'Merry Christmas' co-starring Vijay Sethupathi in her kitty.

+ 7
3 months ago She looks so fresh and pretty