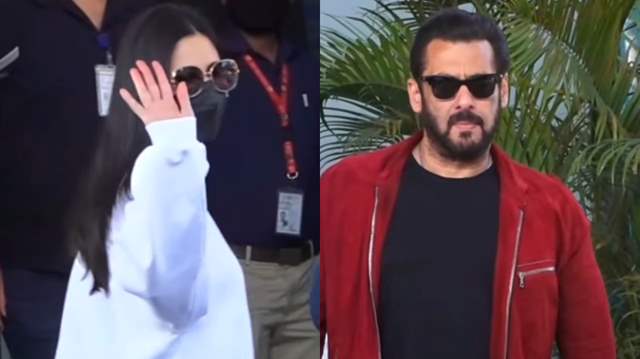 The most anticipated film  'Tiger 3', starring Salman Khan and Katrina Kaif’s last leg is yet to be shot. The duo's comeback to the big screen after 'Bharat' has piqued the interest of fans. And recently, Katrina and Salman were spotted at a private airport in Mumbai on Tuesday evening as they went off to Delhi for the final schedule of 'Tiger 3'.

Before going for the shoot, the Sooryavanshi actress celebrated her first Valentine's Day after her wedding with Vicky Kaushal at their Mumbai residence. Katrina is dressed in a white sweater, leather trousers, and white sneakers in the photos.

Salman, on the other hand, was seen wearing ripped denims, a black tee and paired that with a red wine coloured jacket. The actor looked dapper in his entire airport look which he finished off with boots and sunglasses.

Earlier, a report stated that,

"Salman will resume the last big schedule of the film from this Saturday at YRF and then Salman-Katrina will shoot the crucial Delhi schedule from Feb 14th onwards. YRF is going to maintain supremely strict covid protocols as they have been following since the pandemic started. It is a very crucial schedule for the film and Salman-Kat will be filming for around 10-12 days in the national capital.”

For the unversed, Tiger 3 is touted to be the biggest action film of Hindi cinema with an estimated budget of Rs 350 crore. It's the third installment of the Tiger franchise after Ek Tha Tiger and Tiger Zinda Hai, both of which proved to be blockbusters at the box office.

Let us tell you, ‘Tiger 3’ is being helmed by Maneesh Sharma and it also stars Emraan Hashmi in a key role. The film will also feature Shah Rukh Khan in a special appearance.