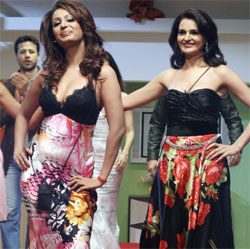 Kashmera Shah seems to have emerged victorious after passing the 'Love test' which she undertook by going to the jungles of Malaysia.

As we know, Kashmera and Krushna Abhishek have been deeply in love, but the tragedy was that Krushna's family was looking for one chance to get their boy married to someone else!! Kashmera had earlier stated that she accepted Sony's Iss Jungle to prove to all that her love is genuine.

This was clearly visible when Kashmera Shah was shooting for Sahara One's Mr. and Mrs. Mishra recently. The Bigg Boss candidates, Kashmera Shah, Monica Bedi, Payal Rohatgi, Alina Wadiwalla, Raja Chaudhury and Aryan Vaid played the reality show contestants of Jungle House in one of the stories of Mr. and Mrs. Mishra, wherein a murder takes place. The Unit 9 team is deployed to solve the murder mystery.

According to our source, "Before the murder, there was a Fashion Show sequence being shot which was supposed to be one of the tasks given to the contestants in the Jungle House. Krushna missed Kashmera so much, that he made a surprise visit to the shoot spot".

Onlookers from the set tell us that, "Kashmera was looking extremely gorgeous and super hot in the fashion show shoot. Krushna was seen thanking his stars for making it there at the right time, and he just could not get his eyes off his girl!!".

Well, all marks to Kashmera for wooing her boy friend even while shooting!!

13 years ago Hate both of them..both are disgusting couple...she is one of yak n sick lady have ever seen...she is not at all pretty .....yakkkk lady