View Profile
For the movie ‘Karzzzz’ Himesh Reshammiya has played a dual role of actor and a music director. He has succesfully been a composer,play back singer and music director for many films.While, Himesh has composed the music for the movie, Sameer pens down lyrics for the same.
Luth jaaon is a song which speaks of pains, bearings and betrayal of love that the actor faces .it is wonderfully composed, along with good beats. It’s a duet sung by Himesh Reshammiya and Harshdeep Kaur 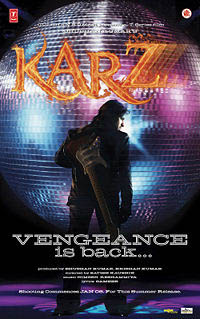 Featured Video
. The unique part of this song is its valley and mountain composition. Its pace slows as it comes to female vocalist and rise up as it comes to male vocal. The remix sounds equally good with upgraded sounds and pace.
‘Hari om’ is like tribute to song ‘Om shanti om’. It’s a song of love where a lover expresses his ‘ haal-e-dil’ to everyone in the audience. It has a smooth flavo of electronic guitar and drums. There is presence of English rap within the song add up to its uniqueness. It is sunged by Himesh . There is not much difference between the original and the remix version except for extra forcefull drum and tabla beats. At point of time one can experience a feeling of some ‘Chowki’ going on…..as the lyrics goes ‘Bolo hare hare’
‘Tandoori nights’ is a love tadka song. Its flow varies with mixed lyrics of Hindi, Punjabi, and English. The song is sung by the trio Himesh Reshammiya, Sunidhi Chauhan and Tulsi kumar. The remix is version of the same is upgradation of beats, music and voice modulation.
‘Soniye Je Tere’ is a song composed in Punjabi. Its flow is smooth. The background sound is a fusion of music for ‘qawwalis ’  and drums together. Himesh has sung the song. The remix of the song does not have much improvisation except for beats and modulation.
‘Dhoom tere ishq’ do not go by the wordings of the song. It is a slow song and nothing to do with dhoom-dhadaka. The song is well composed with classical musical instruments.
It’s freshness lies in a way it is different from rest of the songs. This song has got a line ‘or thodi der mei hum juda ho jayenge’ which is also a part of the song ‘ Dard de dil’ the original song of Karz. Its time duration is about 5.39 minutes. The remix paces up this slow song along with the modulation that gives it a effect of a dhoom.
‘Tere bin chain na aave’ is a slow song sung by Tulsi Kumar and Himesh Reshammiya. The song has a signature note of Himesh which goes like ‘hu……...uuuuuuuuu….’. The music composition for the song is a blend of violins and tabla beats. The remix has done the same work as it has done to other slow songs.
‘Sisak sisak ke’ is a song with some traces of old folk music of 80’s and 90’s. Compare to other songs this one is not that happening.The music of the song is not that impressive.  Once again, Himesh has sung the song.  The remix version of the same is better than the original one. Remix has given an English rap touch.
‘Mashallah’ is a slow sad song. Its flow is even. There is a very good composition of music notes with blend of instruments like tabla, violins, and pianoetc. More than the lyrics, the music is more effective. The remix of the same give a fresh and enthusiastic feel to the song.
‘ Ek haseena thi’song is taken from the original movie ‘Karz’. Himesh and Shreya Ghoshal have sung the song and have given it a different dimension from the original. The remix is equally good with many instruments played together to give a enhanced music composition.
Overall, the album ‘Karzzz’ is a good one with both slow and fast pace tracks. To add more remix of the same are there that are equally good. This album is a treat for all the Himesh Reshammiya music lovers as the track is fully loaded with  nineteen songs.