After Shilpa Shetty and Urmila Matondar, its the turn for yet another Bollywood diva to join the bandwagon on Indian television. So viewers gear up for the sizzling hot actress Karisma Kapoor who joins the panel of judges with Farah Khan and Arjun Rampal in Nach Baliye 4.

We have a tete-a-tete with the dazzling hot LOLO aka Karisma on her way to television and her life in personal front. 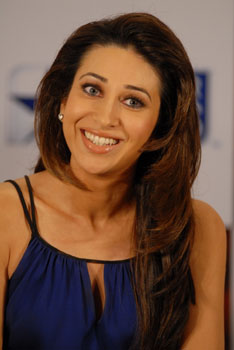 Featured Video
What was the reason for coming back on TV with a reality show?
It’s a strong and fantastic medium and one connects well with the audience. Talking about doing reality show, it’s the current trend in the industry, so I too wanted to try my hand in it. I am sure it will not take me much time to adjust and adapt myself to the medium of television.


Why NB4, when you had offers for many reality shows?
Firstly Nach Baliye is the first dance reality show on television and the energy level is high. Besides that the reputation is also good. I had been a dancer all my life and this is the first time that I’ll be judging someone on dancing skills. Till now people used to judge me but now I‘ll be judging them.

How is your chemistry with Farah and Arjun?
Well I and Farah have worked earlier so we do share a good relation. Besides that I have also worked with Arjun and done stage shows with him. It has been overall a good experience with them. Recently we met at Farah’s place to discuss of how we’ll be judging and shared a light moments with each other.

Are there any chances to see you grooving on the stage in NB4?
Well definitely you will see me dancing in few episodes, but I can’t provide much details. Let the show start and you’ll come to know very soon.

How well do you know these contestants?
For me they are very new and during the course of time I would know them. There are some faces that are not from the industry. The whole experience is going to be fun and I’m eagerly waiting for the show to start.

Who has been your favorite jodi in Nach Baliye?
For me it’s difficult to answer but if you ask me any one jodi of all the seasons then it was Sachin and Supriya. They danced so well and proved that there is no age bar when it comes to chemistry and dancing. I loved watching them on Nach Baliye.

What do you have to say about the reality shows being scripted for the TRP’s game?
I can only tell you that there is no scripting in Nach Baliye. The creative has given us free hand on judging. I don’t think the TRP game will happen in this show. Besides I’m not comfortable with these dramas on screen.

Many times you see judges having different opinions and then one of them leaving stage...
Well we are individuals and will definitely have different opinions but leaving the stage and creating drama is not my cup of tea. There is nothing wrong in consulting each other. Well this is what you have to wait and watch of how we come to a mutual understanding while giving marks.

There have been so many Bollywood actors entering TV. You think this is another alternative for them besides films?
You can’t say that it is another alternative for actors, but it’s a different avenue. Once an actor he/she will always remains an actor. On small screen you get different forms to perform and show your other skills. Today there is no gap left in TV and cinema. The actors from TV have also been coming in films and vice versa.

When I’m on TV I’m also performing as judge and it’s a difficult job. I never believe in judging someone but here the format demands us to do that. So we have to be careful when judging to choose right winners as there are lots of life depending on it.

Are there chances to see you in a fiction show again?
I can’t tell you that as it all depends on the story and the idea. Yes I’m open for it but for now I just want to concentrate on one thing at one time. I also don’t mind hosting a show on TV.

When can we see you and Kareena on same screen? Is there a chance to see both of you on TV?
We have been getting many offers for movies but things didn’t click. I’m looking out for a good opportunity and a script. Talking about seeing both of us on TV, there are very few chances as Bebo is too busy with her film schedules. We don’t even get time to spend with each other.

Karvachauth is soon to arrive… will you be doing it?
Definitely I’ll be fasting as I do it every time. May be this time I’ll be dancing and fasting. (Laughs)

14 years ago Can't wait to see her again, even on TV! She looks great, maybe better than before... all the best to her!

14 years ago Welcome back Karisma :-) Can't wait to see her in NB4. She herself is a good dancer....but I'm sure she will be a good judge too!