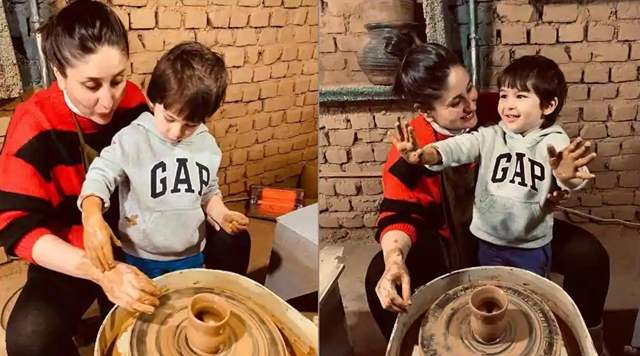 Kareena Kapoor Khan who is expecting her second baby with husband Saif Ali Khan treated her fans with some super adorable photos and videos of her and her son Taimur Ali Khan trying their hands at pottery!

The pregnant actress is currently enjoying her second pregnancy along with spending her time in the hills with hubby Saif and son Taimur.

Taking to her social media, Bebo gave her fans and followers a glimpse of her Dharamshala trip with Taimur Ali Khan. The little munchkin and the mommy-to-be were seen trying their hands at pottery in Dharamkot Studio and channelizing their inner artists.

Brushing aside our weekday blues in a jiffy, the mother-son duo was seen smearing their hands with wet clay and patiently sitting through the mess of making tiny pots. While Kareena donned a red and black stripes sweater teamed with a pair of black tights and hair pulled up in a bun, our dapper toddler was dressed in a grey GAP hoodie and a pair of blue jeans.

The diva gushed in the caption, “Pot, pot, pottery with the lil man Dharamkot studio such brilliant stuff (sic).”

Kareena and Taimur joined Saif Ali Khan in Himachal Pradesh for Diwali, as the latter is currently shooting there for his upcoming movie, Bhoot Police. The family was joined by Saif’s co-actor Arjun Kapoor and Kareena’s BFF Malaika Arora, who too had flown down for festive celebrations with her beau.

Speaking about her plans on Diwali, Kareena had earlier told Times of India, “Saif is shooting in Dharamshala for a film, and I have never been there, so Taimur and I will join him there. We are actually looking forward to setting out. It will be great to travel to the mountains and spend time in the open air and sunshine. It’s been a year where we had to be at home for a long duration. So, going to Dharamshala and being there for a few days will be great.”

Kareena Kapoor Khan shares an Endearing picture of her ‘favourite ...