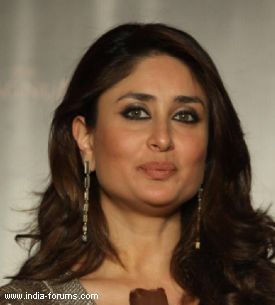 Bollywood actress Kareena Kapoor was thrilled to work with an international crew, who have shot ads with the likes of Eva Mendes and Eva Longoria, as part of an ad campaign for ice cream brand Magnum.

To ensure international standards, the entire team was flown into Mumbai from New York for the ad.

To ensure that Kareena looked her international best, young designer Tanya Ghavri -- who has been working sartorial miracles on Sonam Kapoor and Ilena d'Cruz -- was roped in to do her look for the ad.

Taking a break from the very stylish ad-shoot, Kareena said: "It's amazing to work with international brands and teams. Yes, I am shooting an ad with the crew that did the ads for Eva Mendes and Eva Longoria. Their style of working is very different from our own very talented ad-makers."

About not having her favourite designer Manish Malhotra on board, Kareena says: "Manish is family. There is no question of replacing him. I just wanted to try another stylist for this ad. We all need to work with different people, experience new strains of creativity. Or we stagnate. And to me stagnation is death."

Talking about her Bollywood projects, the actress who has now washed her hands of Karan Johar's "Shuddhi", is getting ready to shoot Dev Benegal's "Bombay Samurai" in May.

The film also features Farhan Akhtar and they both go into intense training to look fighting fit for Benegal's film.

Kareena will again be seen shedding kilos after her very popular weight loss for film "Tashan" in 2008.

"Not Size zero, God forbid! But I need to look leaner specially since my co-star is one of most sinewy guys in our cinema," laughs Kareena.

2 Weeks After Marriage, Poonam Pandey Gets Husband Arrested ...
31 minutes ago

Jaya Saha to be Arrested by the NCB Soon: Report
5 hours ago
View More
TOP