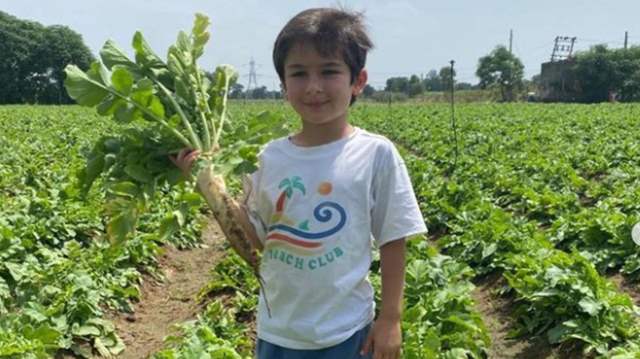 Saif Ali Khan and Kareena Kapoor Khan, along with their two boys Taimur and Jeh, were recently papped at the Mumbai airport on their way to Pataudi Palace, which belongs to Saif Ali Khan's family.

The social butterfly, Bebo has been posting snippets of her holiday on her Instagram account. Kareena then shared some cute images of Taimur plucking the fresh home grown radish from their farm.

It portrays young Tim Tim having a great time while picking radish from an organic garden. Reacting to the photos, Saif's sister Saba Pataudi commented: "So proud #timtim." While fans also poured in their love to Taimur's pictures in the comments section.

Earlier, Kareena shared a video wherein she was seen playing badminton with her actor hubby Saif Ali Khan in the Pataudi palace lawns.

She captioned it, "Some Monday sport with the husband... Not bad... Amuuu (Amrita Arora) are you ready for the game?" She also shared a picture of the Pataudi palace in her stories and captioned it as 'Good Morning. Save trees Save lives."

It is always a treat for the fans when pictures of Pataudi's circulate on social media and Tim and Jeh seem to be their favourite star kids.

Talking about her work front, Kareena was last seen in the film Laal Singh Chaddha opposite Aamir Khan. Despite the starry cast, the film couldn't do well at the box office. Apart from that she would also be seen in Sujoy Ghosh's project 'The Devotion of Suspect X'. This will mark Bebo's debut in the OTT space.

+ 7
3 months ago Such cute pics.. good to see kids spending some time in open air