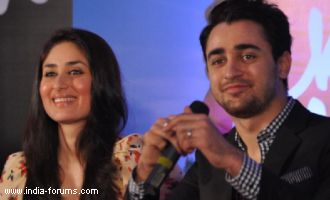 Imran Khan has already admitted Kareena Kapoor is his favourite actress. Working with her in romantic comedy "Ek Main Aur Ekk Tu" has only strengthened his belief.

'She is like a light bulb. The second the director says 'action', this light comes up and you can't take your eyes off her. She is magic,' Imran said on the sidelines of an event here.

Imran's crackling chemistry with Kareena in the promos of 'Ek Main Aur Ekk Tu' is there for all to see. In fact, he was so much in awe of the 31-year-old stunner that he ended up taking almost 100 pictures of Kareena during the film shoot. Producer Karan Johar has suggested he exhibit the pictures soon.

Even when Imran was asked to choose the most stylish actress of B-Town, he was quick to respond, and said: 'I think my vote goes to Kareena.'

Produced by Karan Johar, "Ek Main Aur Ekk Tu" is directed by Shakun Batra and will release around Valentine's Day next year.