The most loved couple of television, Karan Singh Grover and Shraddha Nigam have finally tied the knot!! 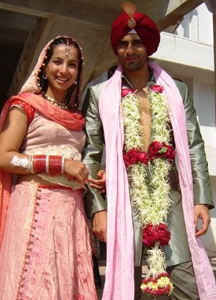 Featured Video
The duo has been in the limelight for quite sometime now, with reports of their breakup hitting the headlines. And on 2nd December, we got the news that Karan and Shraddha were in Goa and they were getting married the same day. Telly Buzz tried calling them, but they were out of reach.

We called few of the Dill Mill Gayye stars, and got to know that Karan was on a break from shoot for 2-3 days. However, they remained clueless about marriage.

And today, we succeeded in getting thro’ to Shraddha Nigam, who confirmed the news to Telly Buzz. “Yes, we got married on 2nd December at Goa. It was a very private affair and only our parents were present. The marriage was conducted in a simple manner”, quips the newly-wed Shraddha.

When asked about the reason for such a secret marriage, she states, “We had earlier decided that our marriage will be a private affair. We wanted it this way and we are happy that all went well”.

Ask her about their honeymoon plans and Shraddha quickly says, “We are back in Mumbai now. We have not planned anything, as Karan has resumed his shoot. We will plan something later”.

So, with the news of Karan and Shraddha’s wedding being official, we wish the newly wed couple a very happy married life!

+ 3
12 years ago I wish things stayed same forever, as u both promised each other, why let a third person win KS, believe in your luv nothing is impossible, get together again:) Dont prove ur luv weak, it not & dont let nicole win & let her have ksg forever, shraddha dont loose ur husband, get him back!! i'm sure somewhere down his heart he still luvs u...& u do to...no matter how much u guys deny it....ur faces say something else....come on...show the world power of true luv!!

13 years ago Awww! I''m so happy for them...wishing Shraddha and Karan all the best for their married life! And they got married on my birthday too, December 2nd :P

It was a total surprise though!!

+ 4
13 years ago Congratulations Karan and sharradha

+ 5
13 years ago how can something bring u so much happiness and sadness?