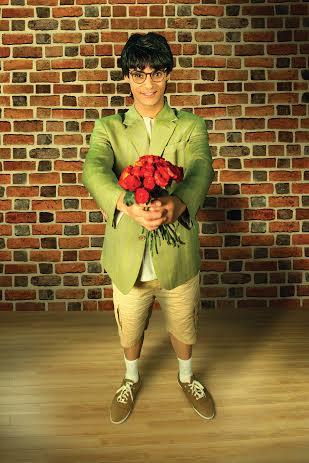 As we all know that TV's cute boy next door Karan Wahi is getting into films in a big way. While he has Yash Raj Films Daawat-e-Ishq which has Aditya Roy Kapur and Parineeti Chopra in the main roles releasing soon, he also has a film in which he will debut as a hero. Karan has not been talking about any of his films till things get official but it is known that he has already started shooting for them.

Well, now we know more about it and thought of sharing the same with TellyBuzz members who adore Karan and are his diehard fans. Yesterday, UTV Spotboy released Karan's look in their film which is titled Babbu ki Jawani.

The film which is to be directed by Amritpal Singh Bindra is supposed to be a rom com (romantic comedy) with Karan playing a simple yet lovable character named Babbu. How he finds true love and his journey towards it is all that the film is about.

Looking at the picture we can guess that Karan's who is a good looking suave guy in real life will have to put in a lot of efforts to get into the character of a rather clumsy character but the talented actor is sure to score well in Hindi films too.

Karan sure has got good backing with big banners like Yash Raj Films and UTV Spotboy which have always encouraged young, new talent.

When we called Karan today he was busy in a shot, however he too has gone ahead and announced about it and has put up the picture alongwith his status update on various social networking sites which has got him a good response from his friends and well wishers.

We at TellyBuzz too wish him all the luck and success for his Bollywood innings.

7 years ago
Love you so much Karan Wahi!! GOD bless u alwaysss

hottiekw 7 years ago
I m crazyyy abt u Karan Wahi. love yaa

gorgeouskw90 7 years ago
Hope you had an amazing day Karan Wahi... eagerly waiting for your movies dude

7 years ago God bless u a huge success..now its difficult to wait for ur movie...bs jaldi se release ho jaey want 2 c u in movie.sure u ll b looking so so so cute..

awesome_kw 7 years ago
Love ya Karan Wahi :) All the best for DEI & BKJ :D

zara_wahiholic 7 years ago
Love u loadsss Karan Wahi. Proud to be ur fan