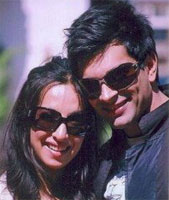 Karan Singh Grover who is showing his 'Jalwa' on the dance floor in Sony TV's Jhalak Dikhhla Jaa 3 had a tiff with a certain security guard at the Filmalaya Studios recently, which has become a talking point in the media circle.

According to our source, "The argument happened when the security personnel did not allow Shraddha inside the Studio as he was ordered not to allow anyone apart from contestants, and this enraged Karan to no extent. Karan who is participating in Jhalak was there for his rehearsals when the incident occurred".

We called up Karan Singh Grover to know what the actual matter was, and he quoted, "See, it was a matter of dignity and integrity. Any man with self respect would have done the same thing. The security man was behaving very badly and was rude too. However, it was just a small issue that got sorted then and there. The production people were very co-operative in handling things".

Better-half Shraddha Nigam too echoed the same and clarified, "Wonder who is blowing up a small problem we faced, and making it look so big. All is fine now, that is what I can say".

Scorpiosrule 10 years ago WTF what was the last line suppose to mean "bade bade shehron main aisi choti choti baatein hoti rehti hai" it sounds like they are taunting KSG!!! Miss KSG so much!!! Wish he comes back in a new show soon!!!

Nisha_90 11 years ago thnx for the article.any guy would have done the same at dat place.

.anjz. 11 years ago [QUOTE=~sumedha~]
karan is soooo right.....obviously no guy will tolerate any misbehaviour towards his wife yaar....
aur yeh toh karan hai...
he loves shraddha to death
he''''s just like armaan
he won''''t allow a single scratch on shraddha...she''''s so lucky!!!!!!
[/QUOTE]

TOTALLY AGREE WID U.. KARAN DID THE RIGHT THING... N NEWAY SHRADHA IS A REGULAR VISITOR TO JHALAK HOUSE... SOO THE GUARD SHUD KNO THAT MUCH..

halifax004 11 years ago aww i feel sorry for the poor guard he was just doing his job.

@marina_charles
karan has a life he makes money and gains love from all his female fans and what do you have I think people like you that only think about themselves should actully get a life.. :P sry if my words were hurtful.
Pce

~sumedha~ 11 years ago karan is soooo right.....obviously no guy will tolerate any misbehaviour towards his wife yaar....
aur yeh toh karan hai...
he loves shraddha to death
he''s just like armaan
he won''t allow a single scratch on shraddha...she''s so lucky!!!!!!

Arbaaz Khan Files a Defamation Case for Dragging his name ...
45 minutes ago

Jay Soni took a break from his busy schedule and spent some ...
48 minutes ago

Akshay Kumar, Kangana Ranaut, Richa Chadha and many more ...
an hour ago

Bigg Boss 14: Prince Narula to enter the show with Sidharth ...
5 hours ago