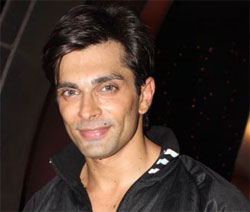 The television hot hunk, Karan Singh Grover has been out of limelight after his immensely popular show on Star One, Dill Mill Gayye, went off air.

But the actor has no intention to keep his fans waiting, as he will be back on television soon; but, this time not as an actor in a daily soap, but as an anchor for Channel V.

A source says, "Colosseum, the makers of the most popular series of Roadies, is coming up with a new travelling show on Channel V, tentatively named Couple. As the name suggests, couples will be participating in the show, where the participating couples will be ordinary people and not celebrities. The show is expected to launch in June."

We contacted Karan Singh Grover and he confirmed, "Yes, I am doing the show, but I cannot divulge anything right now."

We also contacted the Producer Ajit Andhare of Colosseum who confirmed the news, "Yes Karan Singh Grover is hosting the show, but it's too early to talkmore about the show."

The show promises to be an interesting one.

annanyaksgian 9 years ago you r always the best,love u sooo much my angel

Die1hard1Ksgian 9 years ago KARAN SINGH GROVER U SIMPLY ROOOCCCKKK AS A HOST IN PERFECT COUPLE!!!

Rhea Sharma to be seen in Ekta Kapoor's next?
38 minutes ago