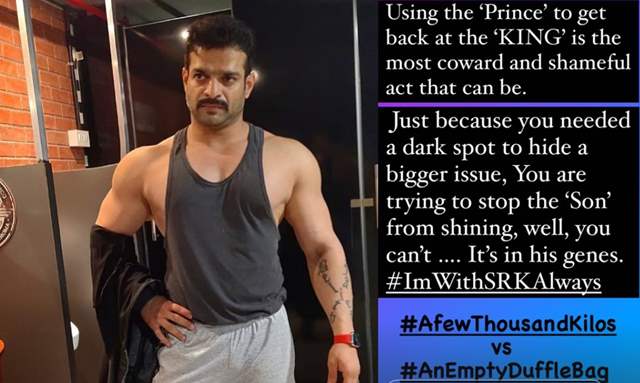 Karan Patel has taken to social media to speak up on the ongoing issue of Aryan Khan's arrest and came out in support of Shah Rukh Khan. The actor has always been vocal about what goes on in the country and even in the entertainment industry. As someone who also looks up to him, he strongly stands by him and lent his support.

Karan took to social media and wrote: Using the 'Prince' to get back at the 'KING' is the most coward and shameful act that can be. Just because you needed a dark spot to hide a bigger issue, you are trying to stop the 'Son' from shining, well, you can't...It's in his genes. #ImWithSRKAlways.

Among other celebrities who have also spoke about the trouble that SRK and the family has been going through, is Nakuul Mehta, also someone who always speaks up regarding issues on current affairs. Aryan has been caught up in the middle of a drug probe after various drugs were recovered from a cruise party last weekend which was enroute Goa.

Karan, on the other hand, recently made an appearance on Bigg Boss 15's Weekend Ka Vaar and was seen supporting friends Jay Bhanushali and Karan Kundrra. Also a part of the episode were Arjun Bijlani, Nikki Tamboli and Neha Bhasin.

+ 4
1 months ago Calling a spade a spade is slowly becoming a privilege in this country. 😢 Glad that Karan Patel exercised his right to freedom of speech, but the IT cell trolls are gonna attack him for this.

1 months ago Proud of you KP