It's time for yet another witty and spicy flavour of Koffee With Karan, Season three, with the charming and charismatic, Karan Johar. This time with more stars and celebrities, the season is going to be a novel one, which any viewer can hope. 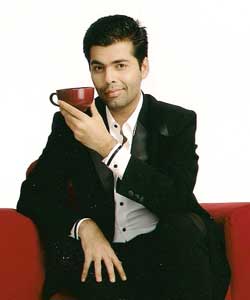 The opening episode which will be aired on November 7th on Star World at 9 PM will see the most vibrant and inseparable couple from Bollywood, Abhishek and Aishwarya Rai Bachchan sharing the couch with Karan.

Talking about why he chose the couple, Karan says "After their wedding, the couple has not given a full-fledged talk to media and I felt that this would be a platform wherein they can be comfortable and informal with the audience."

What if two most charming ladies of Bollywood meet? Well that is exactly what is going to happen in one of the upcoming episodes of Koffee with Karan. The audience will see Sonam Kapoor and Deepika Padukone together in the show sharing their moments with the host.

The duo has been in news for their differences, but talking about them Karan says "The episode I shot with them was one of the most amazing ones for me and they were very comfortable with each other on the sets. I was really impressed with the way they behaved and I am waiting for that episode to be on air so that I could see the audience reaction"

The viewers will also get to see two handsome and charming men of Bollywood, Imran Khan and Ranbir Kapoor sharing the stage with Karan in the coming episodes.

The momentous Koffee Mug, this time will be in Red and the Koffee Hamper is enhanced in a more technology friendly manner with an additional two gizmo, which are the IPad and Blackberry Torch. That's really freaking out, isn't it??

This time with all the more fun and pun with the Rapid Fire questions, Koffee With Karan will take off with its episodes on 7 November on Star World at 9:00pm.

You can't afford to miss the first episode as well as the whole season.

Sajna_Aravind 9 years ago Hey Saranya,
That's a really interesting opening that you've given us and trust me- You have us hooked onto the show even before its started !
Can't wait to watch the show. Good job on the article :)

Naz2000 9 years ago Cant wait to see who are the guests come on the show!

rakesh_pv 9 years ago good work saranya..., it ws really happy to read an article frm my frnd...gr8.
Keep up the good work.

bary 9 years ago i wish it comes on star one simultaneously like before,k deepika n sonam,now this is interesting

TOTAL-ROMANTIC 9 years ago I love Karan..for being what he is..very humble yet witty & very intelligent too..and SINGLE like me..& same age liek mine..Chio ..Cant wait for teh coffee..KARAN..Love ya..God Bless

mishcutie90 9 years ago i want that hamper bb torch and ipad? r u serious?

--Princess-- 9 years ago Isn't it Star Plus? :S
For UAE viewers, it's on Star Plus from Nov 7 onwards !
Clarify please.