As Kyunki Saas Bhi Kabhi Bahu Thi under goes on an extreme makeover from Shantiniketan to the chawls, controversies have begun to spring in the show. With Nandini’s (Gauri Tejwani) attitude in the family changing drastically, viewers are glued to the show to know what’s more to the current track. The Telly Buzz team catches up with Reshmi Ghosh who plays Bhumi, Nandini’s daughter, in the show, to get an insight to the upcoming twist. 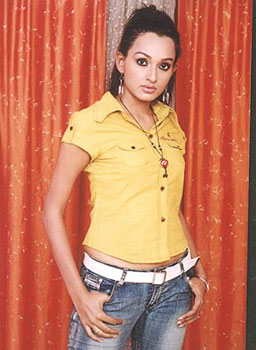 Featured Video
“The whole track which is going on in Bhumi’s life is based on relationships. There will be a slight distance between Nandini and Bhumi. But after all, it's a mother-daughter relation and will definitely improve with time", says Reshmi. Now what about Karan and Nandini? "Due to certain circumstances, the whole relationship between them changes and a new character is going to be introduced in the serial very soon", confided the bubbly Bhumi. She adds to it saying, "Most probably, he will be Karan and Nandini's son".

Adding on to the Bhumi - Joydeep story line, Reshmi further says, “The relation between both of us is blooming and let's see what more they face in life.”

Reshmi Ghosh, as Bhumi has always been seen in trendy attire in the serial, but now it looks like the tide has turned. "Yes, Bhumi is now clad in Indian outfits, because of the situation they live in", says Reshmi. Reshmi relates more to the present Bhumi rather than the one who was seen wearing typical western attire. Says the actress, "I can never relate to Bhumi when it comes to her persona. But yeah, I still relate myself a lot to the present Bhumi, because I like to wear simple Indian outfits."

Apart from her role in Kyunki Saas Bhi Kabhi Bahu Thi, Reshmi Ghosh is also seen in the 9X serial, Kahe Naa Kahe. Talking about the track there, Reshmi says, "The relation between Kinjal and Vidhyut is developing. My role is very important because I am playing Kinjal’s best friend. My relation with Kannav, who is my husband, is also steadily growing. I am helping him find the woman who was inseminated so that we can get the property."

14 years ago wait..what happened to her child..i thought she was pregnant

but hold up, i thought that lawyer Adi was there son .
oh well if he's not, i want him it to be someone hot enough to play karan-nandini's son .