It's always beautiful to see young love blossom!! And as the Grand Finale of Indian Idol 4 takes off tonight, we hear about a similar affair possibly brewing between the finalists, 'The Singing Soldier' Kapil Thapa and 'The Rocker' Sourabhee Debbarma. 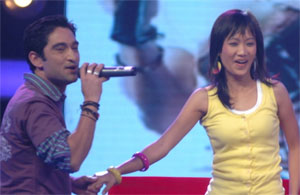 Featured Video
According to our source, "The two are always seen together. The army man had gifted the beautiful Tripura damsel a gift on Valentine's Day as well, and she was as pleased as a punch". Our khabru further added that there is a certain chemistry between the couple. But the two are for the moment just enjoying each others' company, and will take a call about their future only post Idol.

Readers will remember an episode on Idol when anchor Meiyang Chang had jokingly asked Sourabhee, why she chose Kapil over him, and she had smartly replied that she did not want a child with small eyes.

However, when we spoke to Sourabhee about her reported link-up with Kapil, she was at her diplomatic best and quipped, "We are good friends, and there are certain things which are to be kept confidential. You will come to know only after Indian Idol is over".

For the uninitiated, the popular Sony singing reality show has been famous for the linkup stories between contestants of earlier seasons too. A lot was written last year about the possible relationship between Meiyang Chang and Deepali Kishore, which actually acted as a catalyst, for they were brought back this year to host auditions together.  Going down memory lane, Indian Idol two runner-up, NC. Karunya was also linked to the then contestant Antara.

Coming back to Sourabhee and Kapil, we just hope they come out in the open and speak the truth, once they are done with the nail biting tension of the Idol Finale!!

+ 2
13 years ago i luv this jodi..i hope its real not any fake news or rumour

as she said u will knw better after indian idol iz over...shez right...

13 years ago Now she is the winner. Wont even look back at him

+ 2
13 years ago glad she won! congratulations!

+ 2
13 years ago i would be so happy if they will be together forever...i totally love both of them.

+ 3
13 years ago awwww.
i would absolutely love it if they were together.
they make such a cute couple!
:)

+ 3
13 years ago Lol.
I really wanted Torsha to win!
but Sourabhee winning is cool also!

13 years ago they look really cute together... but whatever it is, hope they are happy!