Actress Kangna Ranaut, who plays John Abraham's girlfriend in "Shootout at Wadala", is in awe of her character in the underworld movie and says it is similar to what Smita Patil and Rekha did.

"I play John's love interest. My character is similar to the characters played by Smita Patil and Rekha in the 1970s and 1980s," the 24-year-old said here at a party organised for the film. 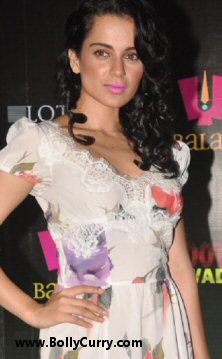 The National Award winning actress, who is working with John for the first time, is happy to have got the opportunity.

"John is a fabulous guy. He is very friendly, very sweet and I am surprised that we have not worked together yet. Now that we have got this opportunity, we are very happy," said the actress who entered Bollywood with the 2006 movie "Gangster - A Love Story".

In six years she has done films like "Life...in a Metro", "Once Upon A Time In Mumbaai", "Tanu Weds Manu" and "Fashion" that fetched her a National Award for the best supporting actress.

In "Shootout at Wadala", John plays gangster Manya Surve who was shot dead by the Mumbai police in 1982 and is the first-ever registered encounter, or shootout, by Mumbai Police.