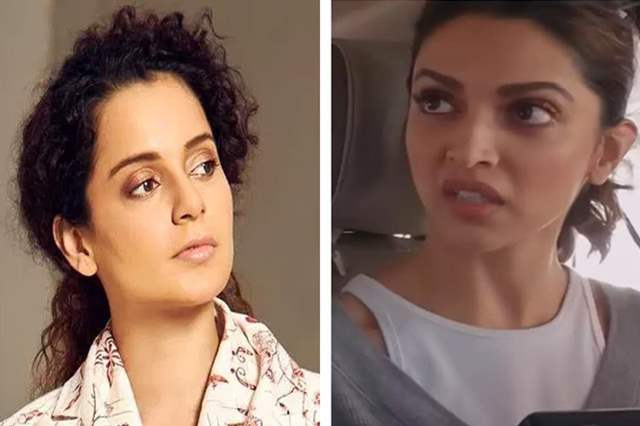 Barely a few minutes ago, we reported about a major revelation where actor Deepika Padukone's name became the latest one to be added to the list of Bollywood celebrities who are allegedly involved in drug exchange. Padukone's chats were with Jaya Saha (she made some big revelations to the NCB durinig her interrogation today and she has been summoned tomorrow again to present herself before the NCB for further interrogation).

And now, post this big revelation, rather unsurprisingly, actor Kangana Ranaut went on to give her take on this saga.

Ranaut tweeted, "Repeat after me, depression is a consequence of drug abuse. So called high society rich star children who claim to be classy and have a good upbringing ask their manager ,” MAAL HAI KYA?” #boycottBollywoodDruggies #DeepikaPadukone"-

This tweet by Ranaut, while obviously furthering her apparent fight against the drug parade is also a jab at Padukone. Everyone is aware about how Padukone has been on the forefront of the cause of mental health where she has even admitted to be suffering from depression years ago. Hence, Ranaut's statement of saying that 'depression is a consequence of drug abuse' is indeed at the same take.

suresh555 1 months ago @basherz Regarding Rhea, I feel more convinced that she has some link in SSR's death. She has changed her stories several times, seems to have replaced his staff with her people and there are too many questionable behavior on her part. I would not trust her at all

suresh555 1 months ago The NCB investigation started mainly to see if Rhea had indeed messed up SSR and had anything to do with his death (which I do believe she did). Then Kangana, starts her BS involving drugs and bollywood (nothing to do with SSR's death). Unlike Rhea, these actors did not have anything to do with SSR's death. Now the SSR death mystery is totally sidetracked and all we hear is the what's app chats of so and so related to drugs. Excuse me but Deepika or Shradha (if they did indeeed smoke a joint) did not drug SSR or aid into his murder.

basherz 1 months ago "I'm a opportunist hypocrite - repeat after me" - this is what KR's soul would be shouting at the top of her voice. And to the snowflakes who think I'm a DP fan, think not. I never liked her from the 1st movie & I still don't do or her antics, I always felt her OTT.

suresh555 1 months ago kangana's venom never seems to end. A tiny bit sympathy I had for her demolished office has ended. This woman sticks her nose every where and is in bollywood only to make enemies. What a restless unhappy soul she is