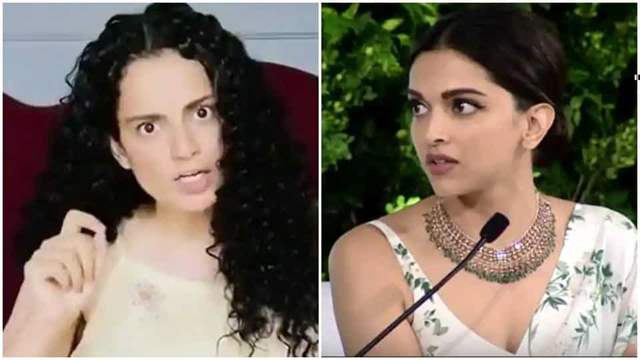 In her tweet, Kangana also took an indirect dig at Deepika Padukone as she slammed ‘those who run depression ki dukan’.

Kangana wrote in her tweet: “The film that we made for Mental Health awareness was dragged to the court by those who run depression ki dukan, after media ban, name of the film was changed just before the release causing marketing complications but it’s a good film, do watch it today.”

The film, directed by Prakash Kovelamudi and produced by Ekta Kapoor was initially titled  Mental Hai Kya. The Indian Psychiatric Society had filed an official complaint to CBFC chairperson Prasoon Joshi and after certain sections of the society raised protests, the title was changed.

Meanwhile, this is not the first time when Kangana has mocked Deepika. Deepika, who has been vocal about her battle against depression,  runs the Live Love Laugh foundation.

After Deepika Padukone was named in the drug case over her alleged drug chats, Kangana had tweeted saying: "Repeat fter me, depression is a consequence of drug abuse. So-called high society rich star children who claim to be classy and have a good upbringing ask their manager, MAAL HAI KYA? "boycottBollywoodDruggies #DeepikaPadukone."

Deepika Padukone is among the first few Bollywood celebrities, who opened up about their battle against depression.

suresh555 1 months ago This woman reflects the misery of her life by being bitter about everyone 24/7. What ao dukhi aatma

BeyondHorizon 1 months ago According to her everyone who is suffering from depression is doing drugs. She is promoting her movie but shaming somebody who is actually going through depression! Sahi hai!

PerfectStart 1 months ago Can't she speak a single line without taking a dig at someone?

Funny29 1 months ago the woman is disgusting. 🤮 i wish her that one day she herself will be suffers from depressions, Will she still have such a big mouth?