View Profile
On Friday night, the legendary Kamal Haasan watched his beautiful young daughter, Shruti, set the screen on fire in the forthcoming Luck. Shruti has already earned rave reviews for the Jee Le and Aazma Luck song promos that are playing on television. 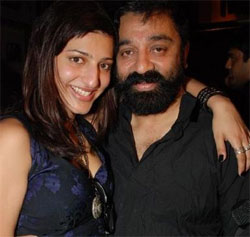 
The special preview of the multi-starrer was held in Chennai at director Priyadarsan's studio. It was also attended by Shruti, younger sister Akshara and noted south-Indian actress and Haasan's girlfriend, Gautami, among others.

Shruti's mother and veteran actress, Sarika, who is based out of Mumbai, was not present at the trial show. Much to the joy of director Soham Shah, Priyadarsan was seen cheering for Shruti all through.

On Saturday, another special preview of the thriller was held at Film City in Mumbai. Bipasha Basu, Arshad Warsi, Celina Jaitly, Rohit Shetty and Mimoh Chakraborty were among those who watched Luck.