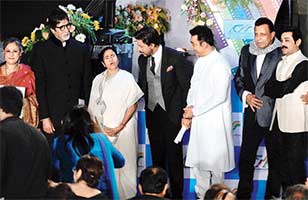 Actor-filmmaker Kamal Haasan, enthused by the start of the Kolkata International Film Festival (KIFF), Sunday likened West Bengal Chief Minister Mamata Banerjee to a "sister" and said he was "surprised" by her dynamism.

"This is my first encounter with the honorable chief minister... I was looking forward to a chief minister, but I found a sister (in her)... I know why you call her that now," said Haasan, during the inaugural event of the 19th edition of KIFF.

Banerjee is addressed by her supporters as "didi" or elder sister in Bengali. She was seen dashing about the dais to ensure the proceedings went smoothly.

"I found a head of a family (Banerjee) busy inviting everyone, a dynamo of energy, and very surprisingly, not interested in sitting in the chair for too long. I was quite surprised... I am not used to it," Haasan said.