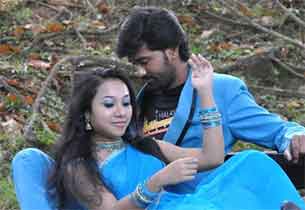 Upcoming Tamil romantic-drama "Kalar Kannadigal" has been entirely shot in Malaysia and its director Rahul Ravi says the place holds an important role in the film, which was recently wrapped up.

"The story is about a Tamil band that goes to Malaysia and struggles to make a living. Music bands traveling to these places have been a culture. My story is based on such culture and the film tracks the story of one such band," Rahul told IANS.

"I had to shoot it in Malaysia because the place is important from the story's perspective. It becomes a crucial character after a point in the film," he added.

"Locations become very important for some stories and they ought to be shot where they are supposed to be shot. My film was also shot in Malaysia for this same reason," he said.

Malaysian actress Divya Sridharan and Ashwin play the leads in the film, which is gearing up for release soon.