View Profile
Not that it is particularly novel, but it's the season of actors turning directors. Again.

From the days of the talkies to the days of talking too much (read: sermonising) like Manoj Kumar, it has been happening all the time, in phases. In fact, in the late 1970s, there was another unique trend noticeable, that of FAILED actors turning into excellent directors. Subhash Ghai, for one. Rakesh Roshan, for another. Not to rule out the royal Shekhar Kapur or many lesser mortals.

Actors lately, failed or successful, are increasingly turning to direction again. We all knew Aamir Khan had proxy-directed Hum Hain Rahi Pyar Ke (or in an interfering manner in Bairaag by Dilip Kumar) till Aamir played the 'takeover tycoon' with Taare Zameen P 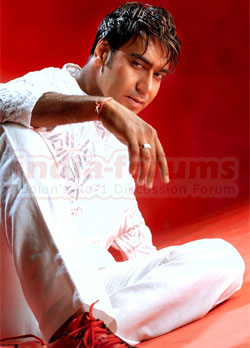 Featured Video
ar in his own name. TV actor Rohit Roy has directed one of the filmlet compilations recently. Sushmita Sen is getting ready to do her star turn with Rani of Jhansi. Newly 'wed'-and-then-'unwed' Maanyata has been goading Sanjay Dutt to graduate from producer to director.

And this Friday, we saw Ajay Devgan make his directorial debut in U Me Aur Hum. Incidentally, Ajay also acted in his father stunt master Veeru Devgan's directorial venture Hum Hindustani. Never mind the fact that it was a flop at the box-office.

On the eve of the film's release, Ajay Devgan talked about U Me
Aur Hum, his hot salsa number and even his off-screen romance with Kajol.

Q: To begin with, are you nervous?
A: No. I'm happy that the film is over and to release. I'm also
happy because the advance booking has gone well. I want U Me Aur Hum to get a good opening because that is half the battle won. I am confident that no one will say that the film is bad. Everyone will like it.

Q: What made you choose this script?
A: This is an idea I had three years ago. The script touched my heart; the concept was good. I think a film to begin with, should be entertaining. The message part can come later. Also, the message shouldn't be obvious, but hidden in the film.

Q: What are you looking for as a reaction from your audience?
A: What I really wanted is that a couple watching this film should draw nearer and hold hands by the end of the film. Or if someone is watching it alone, he should miss his partner so much that he calls her up immediately.