OK, Ekta Kapoor finally unleashed her version of the Mahabharat on 9X last week and before we get to see the second's week's happenings, here we go analyzing the start of Kahaani Humaarey Mahaabhaarat Ki.

Unlike most of her serials, which get away showing rubbish, viewers won't take too kindly to any liberties taken with the much-loved epic. First things first, while she was bang on, in the first episode starting it off with the crucial Draupadi vastraharan – after all Ekta's penchant for drama is well known -- and she sure knows that it's that one episode in Mahabharat which is bound to attract eyeballs and give ample scope for theatrics – the actors fudged it up with their loud, screechy performances. 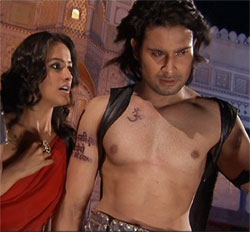 Featured Video
Anita Hasanandani as the sultry Draupadi (in flaming red Manish Malhotra sari) looked sexy alright; all spit and fire, but somehow lacked the gravitas a Rupa Ganguly had brought to the queen of the Pandavas two decades ago in B R Chopra's Mahabharat. Anita screamed and screamed, doing no justice to her heavy-duty lines.

Worse, none of the Pandavas were given a chance to open their mouths because sadly except for the guy playing Yudhisthir, the others seemed to be 'extras' filling in for the real actors. Cheat shooting, anyone? So all we saw was a well toned, glistening back of Bheema and Arjuna's bow, Bheeshma's clenched fists, and Drithrashtra's blinking eyes. Come on, the least she could have done was get the main cast in place and have them ready and kicking for the first episode.

Aryan Vaid as Duryodhana underplayed his wicked part (thankfully) while the actor paying Dusshasan went hammer and tongs as his kohled-eyes did a Kathakali dance. Yet, it was a fairly gripping episode with the foundation laid for some heavy duty drama. 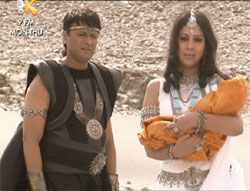 Alas, the second, third and fourth episodes were a journey downhill. Sakshi Tanwar as Ganga, despite her flowing Ganges look, couldn't rise above Parvati Agarwal, a character she's known for, for seven years now. Ditto, Kiran Karmarkar as the insipid Shantanu. He looked tired against the breathtaking locales of Ladakh (that begs the question, why Ladakh?). Makarand Deshpande as Ved Vyasa hammed to the hilt and the actor playing Lord Ganesha looked despicable riding a hairy mouse! (gross).

While the Thursday episode ended with a tight close up of Ronit Roy (haggard) as Bheeshma, it remains to be seen where this kahaani hamare Mahabharat Ki takes the viewers. And it's sure going to be one hellish ride.

So what's wrong with Ekta's version? Getting popular established actors to play key parts is a great idea but sadly, that works against their performances. For instance, it's very difficult to see a Sakshi beyond Parvati or Ronit beyond Bajaj.

Putting up a K-saga in a blue and pink cardboard room set is one thing and mounting Mahabharat is another, especially when viewers still hold the original Mahabharat close to their hearts. A face off between a Tulsi Virani and Ansh Gujral is a sure TRP winner but when you have Shantanu and Devrata (a young Bheeshma) fighting with cardboard swords – a situation which doesn't exist in the Mahabharat – just for the sake of drama, it's just not right.

And so, all said and done, it's a humble request to Ms Kapoor to be careful with her depiction of the maha epic, lest it ruffles the feathers of die-hard Mahabharat fans.

14 years ago This ekta kapoor is an IDIOT. i mean the casting is so HORRIBLE that it simply gets YUCK!!!!! Not a single cast is good. TERRIBLE. how can TRP's go high. she can never recreate the magic of BR Chopra's Mahabharat. her actors are only good at her horrible, idiotic, meaningless, stupid serials.

14 years ago The thing which is taking its usp is the selection of the characters ekta in showing her loyalty with her actors forgets about the real requirements of the concepts.remember each n every actor of BR's Mahabharat was just perfectly fitted in his or her role

14 years ago I have never liked ekta and her work...thankfully i was right...she has messed up with mahabharath. one simple question to Ekta???
HAVE YOU EVER READ THE GITA?????

14 years ago I think its too early to make harsh, adverse comments about the show...the new actors n the show as a whole deserves a fair chance to stand the tet of time!...n one thing's for sure...there could'nt be a better actor in Tellywood to play Ganga n do complete justice to it the way Sakshi did!!..She was truly Divine n looked Gorgeous..loved the way she brought out the calmness of the river Ganges in her emoting!...Sakshi is the Best!!..n as always, Sakshi n Kiran did make a great team! As long as Ekta keeps the realism of the Epic, everything should gradually fall in place...

dips_sweety 14 years ago WHtever be the case , u cant deny the fact that people are hooked on to 9x at prime time on weekdays!

14 years ago Excellent review, I agree with all that you said.

Ekta has butchered the great epic. I am open to new things but this is taking things too far. Mahabharata, as a few members have said here, is not her's to mess with. She cannot depict it the way she likes coz in this process shes sure to hurt the sentiments of many people.

Hv some respect for the great epic, woman! You hv only sexed up the entire show by making all the actors look hot!!!! Frankly that is all that this so called Mahabharata (Yes, i refuse to call this Mahabharat) has to offer.

To start with the costumes are all wrong (wow, the ace designer Manish Malhotra screwed up big time here). Hes dressed up Pandavas in black..what was he thinking???The lingo is pathetic. The scenes look highly animated, specially when Ganga (whos supposed to look pious, not sexy) appears from the holy river.(whts with the water twister???)

Ekta, stick to your family dramas.

14 years ago you guys

just wondering if the actors are limited in their acting ability and can't rise above their previous avatars or is it that we viewers can't think beyond the characters they have portrayed, especially if portrayed well.

14 years ago i don't understand why people are comparing anita with previous draupai ...
as i seen it i saw the new way of mahabharat little modified with time and what is demand on market .. well, i agree in the point that the anita need to work out more in her role but the rest like ganga was so great in her role and as other was great . i hadn't watch the last mahabharat .. but i know the story of it.. so what i think is ekta is doing great job with great set and great starting ,... so i just want to say best of luck and as whole watch it .. i hope it will be good show to watch after watching long timeof saas bahu ... it could be a gr8 break and back to history ...

14 years ago I found the guys' costumes ok. But Draupadi doesnt look classy like she should. Sakshi looked good loved the turqoise jewellery. Ekta should've spent more time and money on getting the dialogs and the diction right, which the characters missed - by a mile!