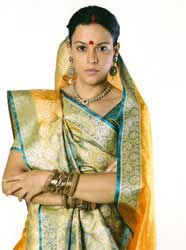 Star Plus and Rajan Shahi's Sapna Babul Ka..Bidaai has seen Karan aka Rahuol Lohani turning negative recently. The guy happens to be the illegitimate son of Inderjeet Rajvansh (Avinash Wadhawan) who is born to a lady Kusum.

In yesterday's episode it was revealed that the lady Kusum is no more and Karan is shown hanging her picture on the wall. The character of Kusum is played by Jyoti Gauba, who was last seen in Directors' Kut's show on COLORS, Maat Pitaah Ke Charnon Mein Swarg.

According to our source, "Though the character is not alive now, Jyoti Gauba will be shooting for some flashback scenes very soon".

When contacted, Jyoti Gauba confirmed the news and said, "Yes, the creatives of Bidaai had informed me that they would use my picture in the show. I have been called to shoot certain flashback scenes, but have not started shoot for it yet. I am presently doing Kashi, so need to do a little bit of adjustments with date".

For the uninitiated, the entire Rajvansh family except for Vasu (Seema Kapoor) know that Karan is Inderjeet's eldest son. Karan has come with baggage to the Rajvansh house to live there..

With the truth coming out before Vasu, there will surely be sparks flying around in Bidaai..

10 years ago ran out of ideas!same old tricks from
other shows or movies coping...........
I thought bidaii was different....sorry not anymore.

fan10 10 years ago hope it turns out tht karan is not inder r vasy=u son..plz

+ 4
10 years ago hw does this have to do with the main theme ..."are balck epople luckier than fair people"?

+ 3
10 years ago waitng tht something interesting will happen

10 years ago Boring!!! Rajan just need some stupid story to make the show run another year!!!

10 years ago Boring.
for me the serial was end when vasu accepted her bahu's.