This Christmas is going to be more exciting because along with Santa Claus, elephant Jumbo is coming all the way. So lets have quick 'sneak-peek' to his journey. 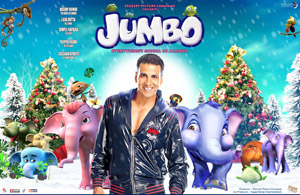 Elephant, Jumbo is taunted by the other elephants because he is fatherless. Naturally, Jumbo is curious about his father, and he's told that his father is a war elephant for the king.


So Jumbo wants to find his father. Still a young elephant, he wanders off in search of his father. He is soon captured by a raiding party. In trying to escape from the camp, the young elephant is befriended by a boy prince, who has been ransomed to his foes. The prince has the ability to calm Jumbo into thinking clearly, and Jumbo makes his escape.


A weakened Jumbo then comes upon a village where humans and elephants are working together. He is befriended by a beautiful young elephant cow, but is then chained up until he is tamed. Jumbo soon learns to value the humans who have captured him. Under the training of a wise, old mahout, he becomes bigger and stronger. 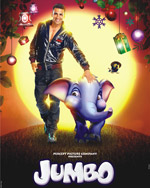 A local warlord comes around annually to collect tax from the village, and his taxes have become greedier each year. The village rebels, and with the humans and elephants working together, the warlord and his beasts are defeated.


The call then goes out from the king for elephants for his army. Jumbo is taken to the palace. There, he is seen by his mother, who calls out to him. Jumbo goes wild in trying to break free from his chains to meet his mother. The King notices this, and remembers Jumbo from his childhood. The king is able to calm Jumbo, and from then on Jumbo serves as the personal war elephant of the king.


In battle, Jumbo meets a giant war elephant with fiery eyes that was responsible for the death of Jumbo's father, and Jumbo gets a chance to acquit himself in battle for the glory of the kingdom, and take revenge.