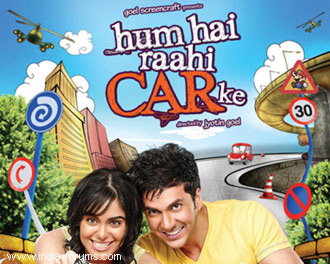 Juhi Chawla, who has been maintaining a low profile, will soon be seen in a film titled 'Hum Hain Raahi Car Ke', says Adah Sharma.

'Juhi Chawla and Sanjay Dutt have a prominent role in 'Hum Hain Raahi Car Ke', which is a romantic comedy. It's a road trip film,' Adah, who is playing the lead role in the movie, told IANS.

'It was great working with them. They are very good actors and are very spontaneous. Their comic timing is amazing,' added the actress, who made her BOllywood debut with '1920' directed by Vikram Bhatt.

The title of the film, which is being produced and directed by Jyotin Goel, reminds one of Juhi's hit film 'Hum Hain Rahi Pyar Ke'.

When asked if 'Hum Hain Raahi Car Ke' has any connection to the hit 1993 movie, Adah said: 'The only connection will be - that film was a hit and even this will be.'

The film also stars Dev Goel, who once worked in a bank. He is debuting as an actor with 'Hum Hain Raahi Car Ke', which is in pre-production stage and the release date will be announced soon.